Going beyond the classroom at Cabin John Middle School: Part I

The students at Cabin John Middle School don’t just learn about their environment — they take active steps to help make it a better place! As part of their fall semester project, groups of 6th grade students performed environmental research and community service projects on topics such as invasive plants, fish migration and dams and wildlife conservation.

Thanks to the guidance of Eric Elmer, 6th grade teacher of Investigations in Science, the students helped educate others in their community about what they learned and how everyone can do their part for the environment.

This is the first in a three-part series on some of the projects performed by the 6th grade class of Investigations in Science. 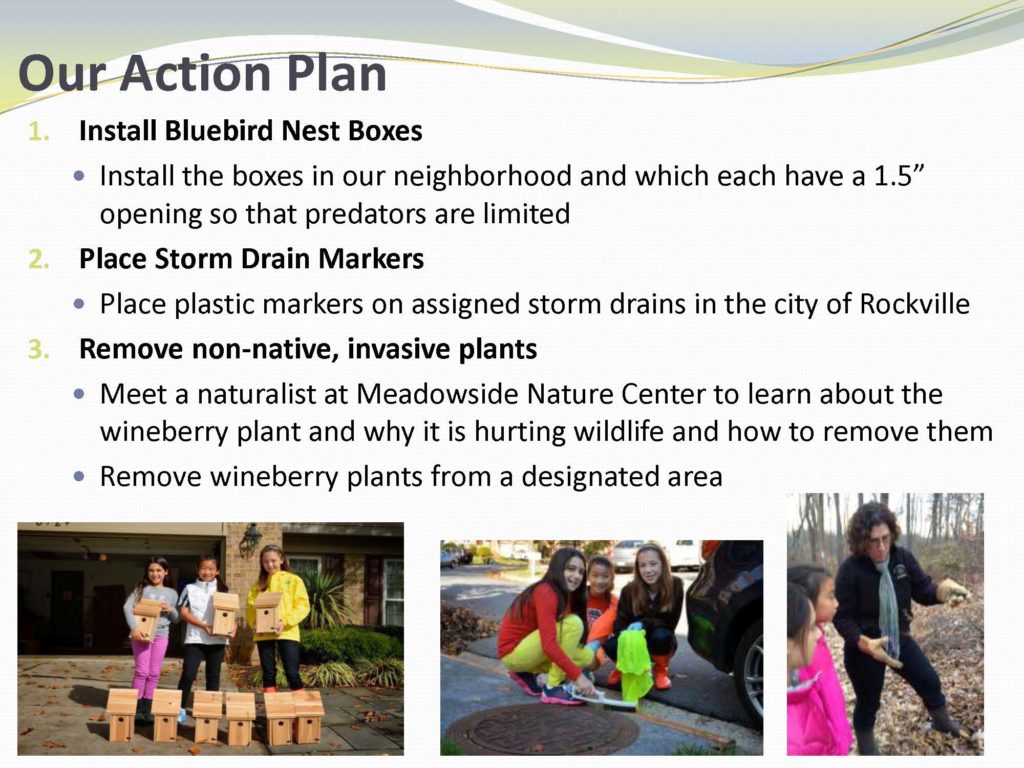 Our group addressed three wildlife conservation issues: the endangered bluebird, the pollution of rivers and waterways, and the invasive plant species called wineberry. If people change their behavior and steps are taken to improve the environment, all three of these issues will eventually decrease.

First, the bluebirds do not have a safe place to nest and make homes which makes them more vulnerable to predators. One solution to this problem is that we put up bluebird nesting boxes to create safe homes and places for the bluebirds to mate. This helps because aggressive birds, like the house sparrow, will not be able to get into the small one and a half inch opening in the bluebird box.

Second, when people dump garbage, chemicals and waste into storm drains, they may not know that instead of going to a water cleaning facility all of this pollution is going through Maryland’s watersheds, into the Potomac River and finally, dumped into the Chesapeake Bay. One solution to this problem is to mark storm drains with signs that say “Don’t Pollute the Potomac River”. These signs will raise awareness and inform people about the pollution issues of the Potomac River. It may make them think twice about throwing trash into the sewer.

Third, the wineberry plant, which is non-native and alien to Maryland, is taking over Maryland’s native plants. It does this by taking up growing space, preventing the native plants from getting sunshine, and taking water from the ground that other plants need. This hurts our ecosystem because animals, such as deer and rabbits, feed off of the native plants that the wineberry plants are taking over. One solution to this problem is weeding out wineberry and ensuring that you remove the entire root so that it does not dig deeper into the ground.

By learning about a variety of wildlife conservation issues, we help protect our ecosystem one bluebird, one river and one plant at a time.

5 comments on "Going beyond the classroom at Cabin John Middle School: Part I"