A green treefrog takes up residency in the Paint Branch Watershed! 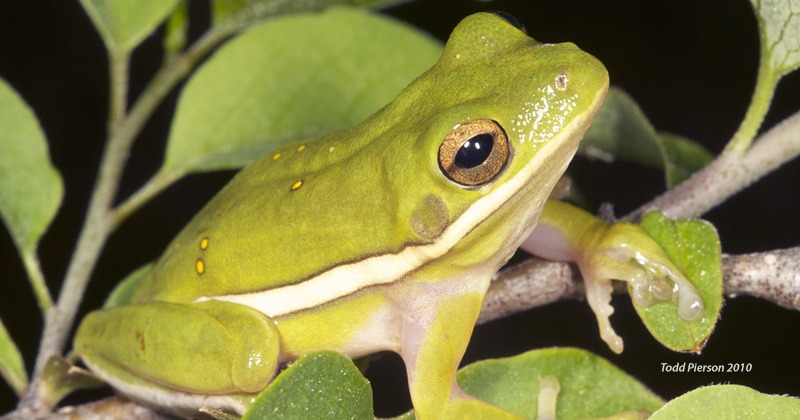 During a warm summer night, a Montgomery County FrogWatch volunteer, Maura McMullen, heard a strange call that she was unable to identify from the County’s frog and toads website. She sent in the recording to DEP to help her identify the species. DEP identified the frog as a green treefrog, the first recorded finding of this species in Montgomery County!

Green treefrogs are historically found along the Atlantic coastal plain species, meaning they prefer flat areas of low elevation near the seacoast. Montgomery County is located on the Piedmont, a plateau located between the Appalachian Mountains and the coastal plain. Historically, the green treefrog has not been found in the Piedmont.

Is the green treefrog’s range really shifting or did it come in from a nursery? Only time will tell. Maura will continue to monitor the stormwater management pond in the Paint Branch watershed. The true test will be if she continues to hear the green treefrog – or multiple green treefrogs – next year.

The range of Green Treefrogs in Maryland (copyright DNR)

The Importance of Citizen Science

The Montgomery County FrogWatch program is a chapter in the nationwide FrogWatch USA program, in which volunteers adopt and monitor frogs and toads by identifying their breeding calls. Rachel Gauza, the FrogWatch USA National Coordinator, states “this is also a stellar example of how citizen science can spread awareness. Maura was familiar with diversity of sounds, knew how and when to listen, and where to go to confirm and learn more.” Citizen science programs, like FrogWatch, are critical in collecting long-term or large-scale data.

For those interested in becoming a FrogWatch volunteer visit the Montgomery County FrogWatch website to learn more.
Have you seen or heard any uncommon species in Montgomery County? Submit a recording or picture to the Maryland Amphibian and Reptile Atlas.

2 comments on "A green treefrog takes up residency in the Paint Branch Watershed!"