The students at Cabin John Middle School don’t just learn about their environment — they take active steps to help make it a better place!

Migratory Fish: The Challenge of Passage Over Dams

Our environmental issue focused on dams, the impact of dams on migratory fish, and ways to help migratory fish pass over dams. First, we had to understand dams. We found that dams have pros and cons. 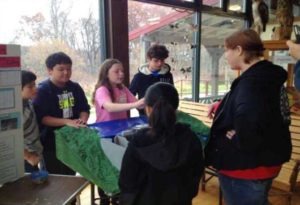 But, on the other hand… 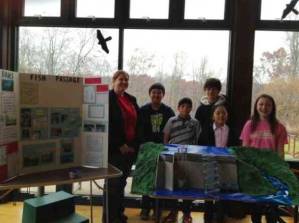 We followed several steps to complete this project: conducting research; building a model; making a display board; creating a power point presentation; and finally, making a public presentation to raise awareness.  In order to educate the public and raise awareness about the effect of dams on migratory fish, we decided to build a model.

After our model was built, we created a display board to show real world examples of dams, the various types of fish passage, the number of miles of fish passage that has been opened up in the Chesapeake Bay and dam removals. Then, we developed a power point presentation following a scientific rubric set out by our teacher, Mr. Elmer. Finally, we made a public presentation at the Croyden Creek Nature Center.

We learned about dams, the special nature of anadromous (migratory) fish, the impact of dams on them, different strategies to help them pass over dams, the limits of fish passage and when dam removal works best.

First, we were very surprised to learn that most rivers in the U.S. are blocked. In fact, the U.S. Fish and Wildlife Service estimates there are 2.5 million blockages on our rivers! Most of these dams are very old and have no more economic value. Still, some are very important economically. 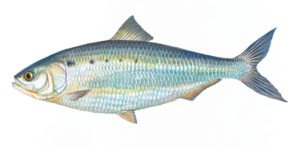 Second, we found out the anadromous fish commonly found in the Chesapeake Bay area are American Shad, Hickory Shad, American Eel, Blue-Back Herring, Striped Bass, and Alewives. These fish are considered migratory fish because they are born in fresh water rivers and live most of their lives in saltwater oceans but eventually return to fresh water rivers to spawn. 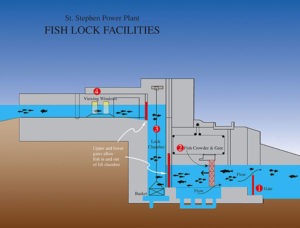 What Works and Doesn’t Work

But, after more than a decade of building fish passages, there is growing evidence that fish passage just doesn’t work as well as everyone had hoped it would. Partly, it’s the fish: a lot of fish are very finicky; some will only go into a fish ladder if it is on the right bank or vice versa. Others will not continue up a ladder if the turn into the resting pool is too sharp.

Partly, it’s the passages themselves: lifts and locks can have mechanical difficulties in the height of the short spawning season so not many fish pass. In the end, less than half the fish make it through ladders lifts and locks. On a river with many dams, like the Susquehanna, less than half of the fish pass each dam so in the end less than five percent of the migratory fish ever make past the fourth dam (York Haven Dam) to reach traditional spawning grounds; fewer still make it back down the river to the ocean to grow up! So, fish populations continue to decline.

As a result, there is growing support for dam removal in order to restore natural habitats for fish so fish populations can recover. Dam removal is often best for fish because it restores the natural habitat so all species (big and small) can pass, there is no maintenance needed, and it is a self-sustaining ecosystem. Even one dam removal can open a large watershed with thousands of stream miles. 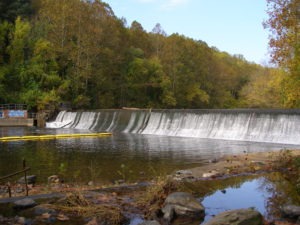 Still, removing dams isn’t always the best option either. We have to accept that we will always need some dams for economic reasons and that some dams should never be removed because they hold back polluted sediments or invasive species. When we need to keep a dam, a priority should be placed on installing natural fish passages. Building multiple entrances on both sides of the river so fish have a better chance of finding the lifts and ladders would be another way to upgrade fish passages.

Overall, we discovered that we have to be really careful about how we impact the environment; the environmental issues involving dams are much bigger and more complex than many realize. Dams affect not just fish, plants, frogs, birds, and other animals but they also affect humans. When fish stocks begin to decline, whole ecosystems, including those we depend on, begin to collapse.

We hope many benefited as a result of our project. We hope the public became more educated by our presentation on dams and their effects on migratory fish in the Chesapeake Bay watershed. We also hope we made a difference by helping to build support for individual, non-profit, and government efforts to help save migratory fish. We are very grateful to the Croyden Creek Nature Center because they gave us the opportunity to present our model and findings publicly.

Our group also really benefited from this project. We feel very proud because we were able to organize ourselves outside and get a lot done outside of school. We worked together over several months to build an awesome working model; it was a lot of work but we also had a lot of fun! We also really benefited from learning how to create a power point presentation and then actually present it publicly. Once we understood the importance of this issue, we really enjoyed sharing what we had learned.

In the end, we came up with several ideas about how we all can contribute to solving this problem in addition to identifying steps dam operators and government officials can take.

This is the second in a three-part series on some of the projects performed by the 6th grade class of Investigations in Science.  View Part I: Going Green Action Plan.  As part of their fall semester project, groups of 6th grade students performed environmental research and community service projects on topics such as invasive plants, fish migration and dams and wildlife conservation.