Has the Bag Law been successful at reducing plastic bag usage?

Have you noticed fewer plastic bags hanging from trees or hung up along our streambanks? Montgomery County watershed volunteers who clean the streams certainly have.  It’s amazing how a little 5-cent carryout bag law has changed shopper behavior and reduced bag litter.

How Much Has Bag Usage Decreased?

The Sierra Club and the Neighbors of Northwest Branch were interested in finding out whether the bag law had encouraged shoppers to bring their own bags.  Volunteers braved freezing fingers, toes and everything in between during the Polar Vortex of 2014 to find the answer.  So there we were, clipboards in frozen hands, for one weekend hour at the exits of 56 stores in Montgomery and 46 in Prince Georges County, recording the number of shoppers with purchases in all reusable bags, all disposable bags, a mix of the two, or with no bags at all.

Members of the Neighbors of Northwest Branch at cleanup event

We surveyed some 17,000 shoppers in the two counties and compared behavior in Montgomery (with bag law) and Prince Georges (no bag law, but education, some reusable bag distribution, and reusable bag credit in some stores).

Results: nearly two-thirds (64.5%) of Montgomery shoppers use at least some reusable bags or no bags, while the comparable figure in Prince Georges is only 12%.

What Did the Study Show?

What about those shoppers who manage not to use any disposable bags at all?  Countywide in Montgomery, that’s 60% of shoppers! In Prince Georges, just 10%.

Some Montgomery shoppers wheeled their full carts to the car and unloaded groceries into boxes stored in the trunk.  For small items that used to be bagged, shoppers just carried them out.  Most used an impressive collection of reusable bags from a variety of stores and environmental organizations. 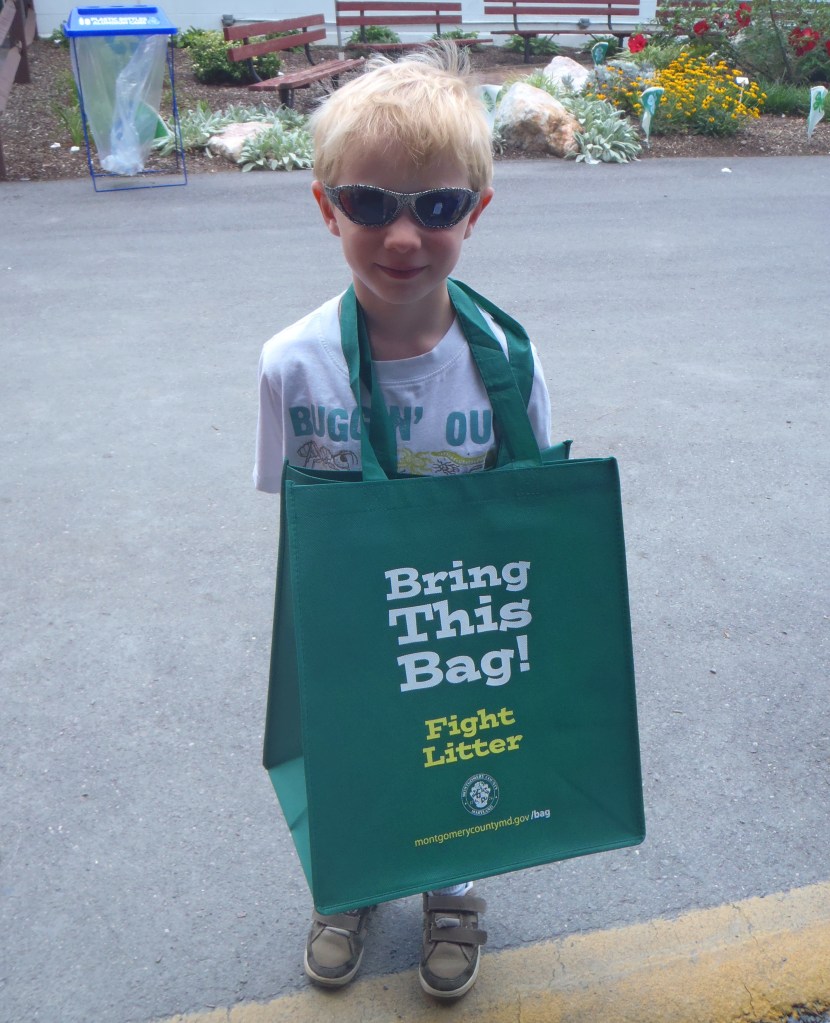 Reusable Bags Are a Smart Investment

For the cost conscious, reusable bags make good sense. They hold about twice as much as the plastic disposable bags. So a cart of 6 disposable bags would need just 3 reusable ones. Assuming 99 cents each, that’s $3.27 with sales tax. Cost is recovered on the 11th trip to the grocery because $3.30 in bag fees will have been avoided.  But if the store gives a 5-cent CREDIT for reusable bags, at the 7th trip our shopper will have saved $2.10 in avoided bag fees and received bag credits of $1.05, totaling $3.15 and making cost recovery almost complete.  After that, it’s pure savings.

Montgomery’s streets, streams, and wildlife, not to mention property values, are grateful for the reduction in bag litter!  Next to address: Styrofoam, bottles, and cans.

Article by Anne Ambler, Neighbors of the Northwest Branch

Note:  Martha Ainsworth, Chair of the Prince Georges County Group of the Sierra Club, initiated the survey and performed the statistical analysis.  Anne Ambler, then President of Neighbors of the Northwest Branch, coordinated the survey in Montgomery County.  Twenty-seven volunteer surveyors, including NNWB members, Sierra Club members, and others, performed the survey in Montgomery County.  For specifics about the survey, contact Martha at martha.ainsworth@mdsierra.org or Anne at anambler@gmail.com.