Last year, I decided it was time for me to adopt a furry creature. I can honestly say that I was not truly aware of what I was getting into, but bringing Bear into my life was one of the best decisions I have ever made.

Eight months later, I am still learning what it means to be a responsible dog owner. Not everything you do is fun (taking walks during this long winter), but they are a necessary part of owning a dog.

Maybe that’s why it irks me so much to see humans that are not doing their part to be responsible dog owners – as a courtesy to their neighbors, their communities, and even their own dogs. 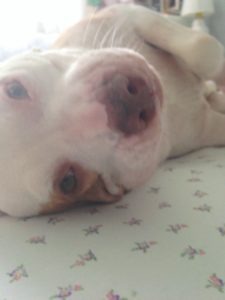 Here is the gist… Pick up the dog poop!

I can sit here and give you all the reasons:

In the end, we all know that picking up your dog’s poop is the right thing to do.

The Multiplication of Poop

During this snowy season, I have learned that my dog is very opinionated about finding a nice spot to take care of his business. Miles into our walks, I still don’t know what exactly makes him press on despite wind, snow and my pleading for sanctuary.

We’ll pass by piles of poop all left behind by neglectful owners. At one spot near my house, there are piles of different sizes, shapes and colors all left together in a small area. 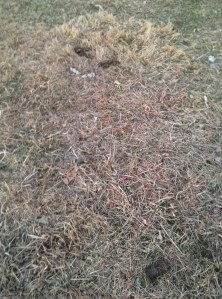 Can you spot all the poop piles?

All I can reason is that once one owner doesn’t pick up after their dog, other owners use that as a license to do the same. “If my neighbor doesn’t have to pick up after his dog, why should I?”

The problem with this is the multiplication of poop. One dog’s poop might not seem like much, but imagine if everyone thought this way?  Each year Bear alone produces approximately 582 pounds of dog waste. Imagine all the piles of dog poop, in our public spaces and parks, along our walking paths and flowing into our streams!

So after reading this, hug your dog for me and pledge to pick up your dog’s poop.

It’s easy, and the nice (right!) thing to do for your community!

– By Ana Arriaza and Bear Arriaza 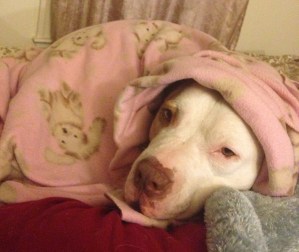 Bear being a wimp during the winter snow storms.

6 comments on "Walking the Poop Loop"