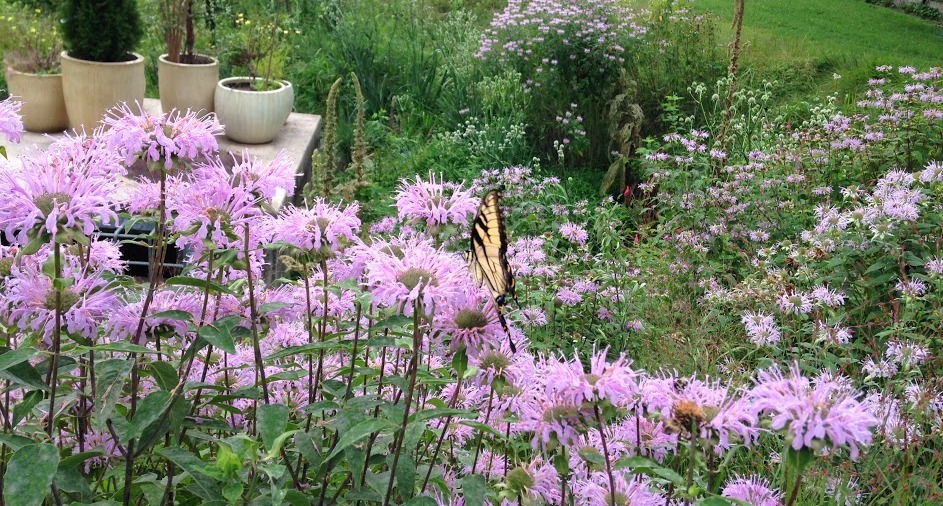 It’s good to have friends in high places.

That is one of the keys to the green upgrades happening at Adat Shalom Reconstructionist Congregation in Bethesda. Most recently, those upgrades have included about 2,800 feet of new conservation landscaping.

These new areas are serving as natural filters for runoff from nearby lawns and roads, and were made possible by support from two places: the congregation’s leaders and the Montgomery County RainScapes program.

According to Shelley Rudick, a congregation leader at Adat Shalom and one of the members who helped plan for and develop the landscapes, getting the buy-in was easier than you might think.

“We have an area where water pools. It was really dirty and toxic water, a lot of runoff from the road,” said Rudick, who is also a master gardener. “It had oil, gas, lawn chemicals and other things in it, and regular turf was not a good filter…Since putting in the conservation landscaping, the absorption of those chemicals has gone up exponentially.”

On the temple grounds, stormwater converges in a basin area. Even though there is a drainpipe at the center of the basin, water still fills the area during a major storm.

The fairly steep slope of the basin itself presented challenges. Mulch placed in that area—a necessary part of keeping weeds in check, especially when young gardens are establishing themselves—would run down to the bottom of the basin and clog drainage areas, which exacerbated the problem.

Luckily, Rudick and RainScapes officials came up with a pretty novel idea.

“We collected plastic newspaper bags and stuffed those with mulch,” Rudick said. “We took those ‘logs’ and placed them strategically around the slope to keep weeds down and keep moisture in. Eventually the plastic split and we gather it up and dispose of it.”

Adat Shalom is ahead of the curve in a lot of areas. They have also installed solar panels on their roof and grow vegetables on their grounds, among other green features. This mindset starts at the top.

“It’s very important to bring clergy and lay leaders on board from the beginning,” Rudick advised. “The clergy sets the tone, and if they’re on board, it makes it much easier. Otherwise, things can be an uphill battle.”

Adat Shalom’s rabbi, Fred Scherlinder Dobb, is concerned about climate change and environmental stewardship, Rudick says. But what if your congregational leaders are not similarly predisposed?

Plenty of groups exist that are happy to visit communities of faith and discuss the importance of the environment in general and stormwater management in particular—an important topic for areas that, like all of Montgomery County, ultimately drain into the sensitive and struggling Chesapeake Bay.

Some of these organizations include Greater Washington Interfaith Power and Light and the Chesapeake Stormwater Network. Perhaps the most meaningful for county congregations, though, is the County’s RainScapes program, which is now reaching out more deliberately to faith communities through its involvement in the national Sacred Grounds program.

“We could not have done this without RainScapes,” Rudick said, adding that Adat Shalom has received a total of $10,000 in rebates from the program for its projects. “The money was critical for the projects, but they also provided enormous technical support.”

Are you interested in learning more about how RainScapes can help your congregation get greener? Explore this site where you’ll find links to the presentations from the April 19th 2015 Sacred Grounds Workshop Part I