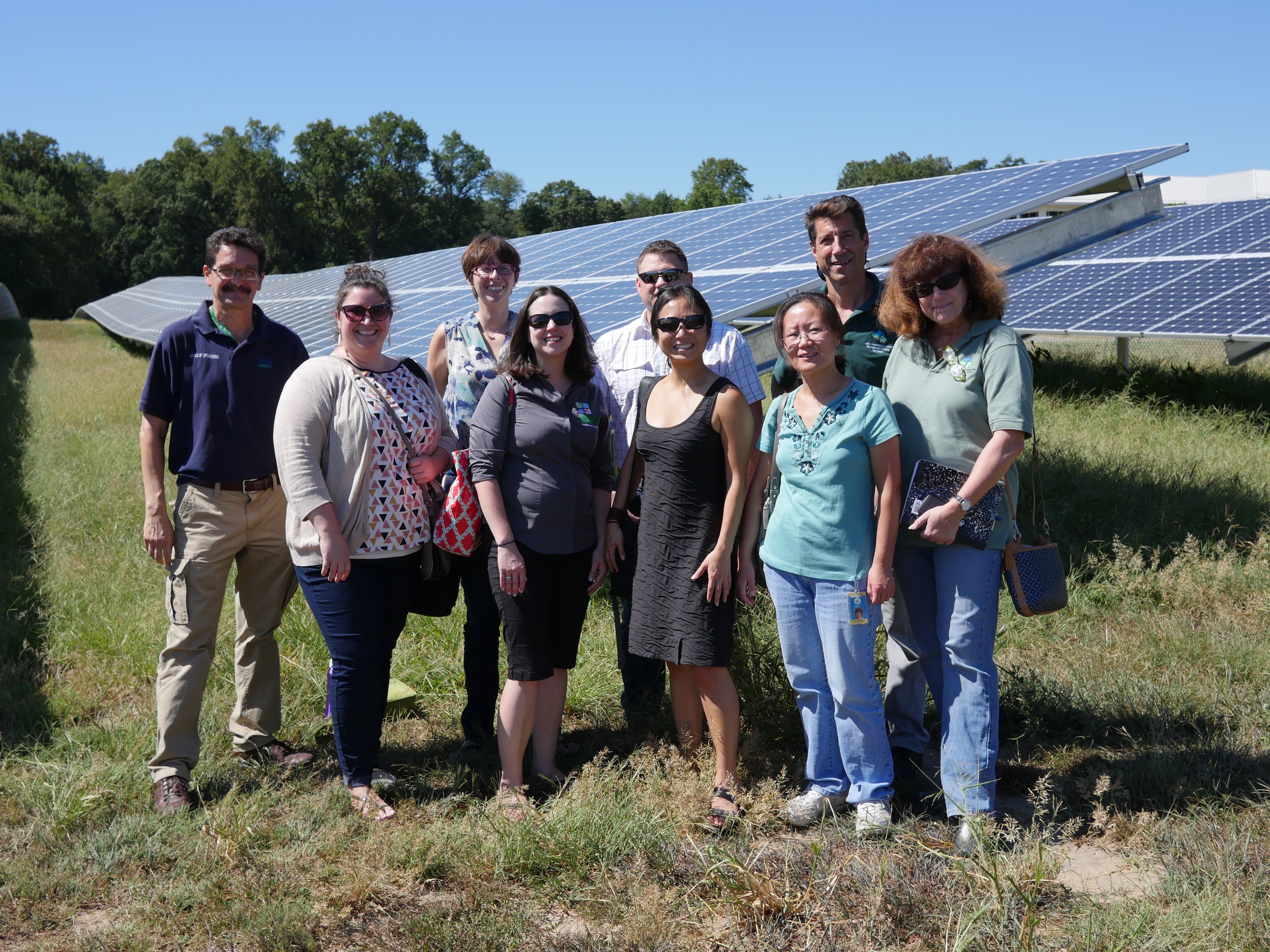 In September 2015, Ed Murtagh, a Sustainable Operations Manager for the United States Department of Agriculture (USDA), was kind enough to give the Department of Environmental Protection staff a tour of the solar farm at USDA’s George Washington Carver Center located in Beltsville, MD. The Carver Center is a 350,000 square foot facility on 43 acres, home to various USDA agency offices, an energy intensive data center, and a child development center.

The solar farm is an impressive 1.6 Megawatt (MW) capacity system that sits on 6.2 acres of land behind the Carver Center. The land sits adjacent to the railroad tracks, near the bustling Beltway, and before being a site of solar power was actually used for test-growing soybeans. 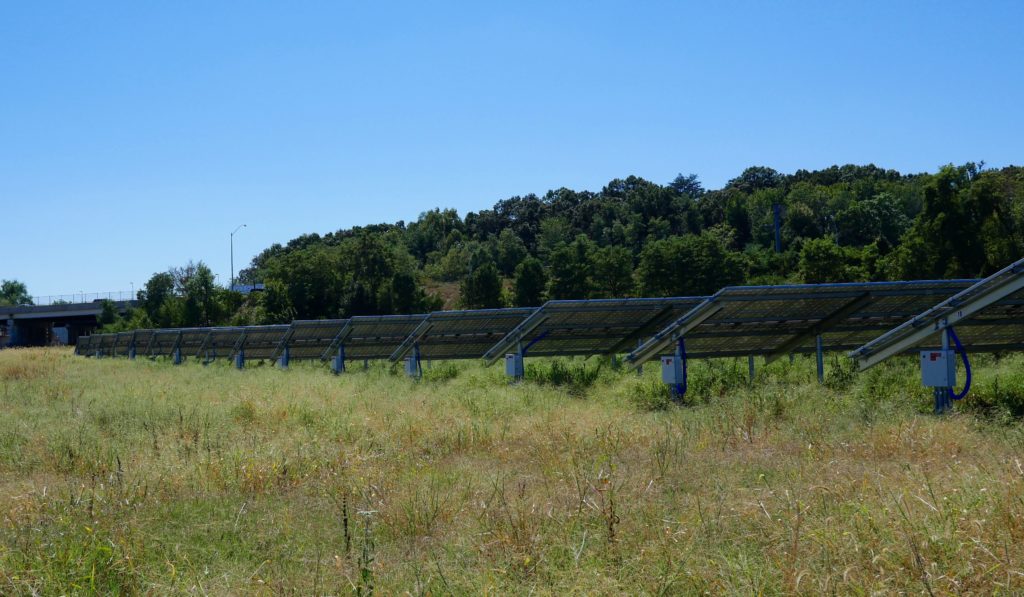 The system also includes 7 inverters (that convert the direct current solar power into high-voltage alternating current electricity) and an onsite transformer (that corrects the electricity voltage so it can be used in the building). USDA also considered a roof-mounted system but doesn’t have enough southern-facing area; installing solar canopies and solar-powered electric vehicle charging stations for the parking lots may be on the horizon in the future.

Getting Down to Brass Tacks

What does that all mean?

The solar panels create enough electricity to meet 20% of the building’s energy needs. That means big energy savings for the building—the solar array has helped cut USDA’s utility costs by well over $200,000 annually. 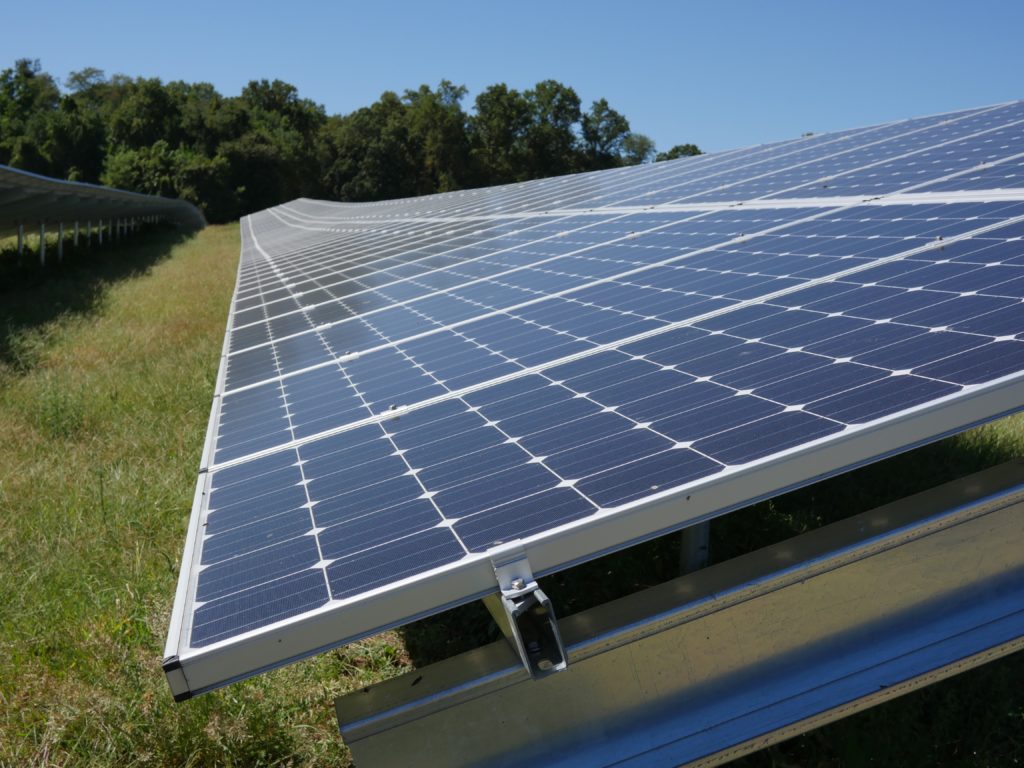 Since the solar farm has been online, it has produced 1,067,787 kWh of electricity—that’s equivalent to power 87 homes or planting 19,317 trees. On weekends when energy demands in the building are low, the system actually generates more electricity than the building needs, so some of that renewable energy is sent to the grid. You can see live solar energy statistics on the electronic display mounted in the Center’s lobby—one of many ways that USDA engages the public and encourages them to take sustainable actions in their own lives.

The $4.5 million project was directly financed with capital funding.  After the design plans were finalized, construction began in February 2015, and the solar panels were installed within a speedy 6 weeks. Wiring the panels and connecting to the inverters and transformer took another month, followed by commissioning and testing. The official ribbon cutting ceremony was held on Earth Day 2015, and the solar panel system was fully operational by June 2015. 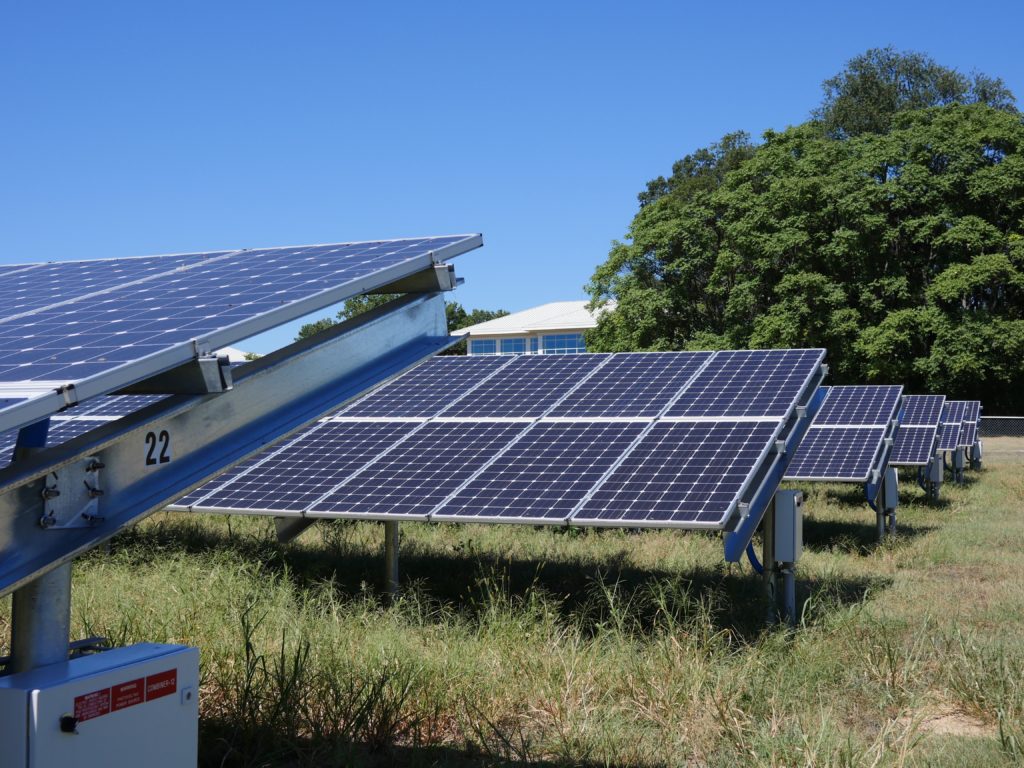 Other Green Features at the Center

The Carver Center was thinking green well before the solar panels were installed—the original building design in the 1990s had sustainability in mind. The site plan took into account the older-growth trees on the site, developing the building around the already established tree grove. Now the Center benefits from tree shading, reducing the load on its cooling systems in the summer.

Outdoors, the Center also has pollinator gardens, as well as low-impact design landscaping and rain gardens to help with stormwater management. Indoors, the Center has a number of sustainable design features, including daylighting and thermal ice storage on right-sized equipment so the building doesn’t use more energy than it needs. USDA also saves taxpayer dollars by using EmPOWER Maryland rebates offered by Pepco for high-efficiency light bulbs and an energy curtailment program to save energy during peak-demand times. Ed Murtagh noted that USDA’s ultimate goal is to make the Center net-zero if possible.

You can see the solar array up close, too! USDA occasionally offers this informative and high-energy tour to interested groups. Email Ed Murtagh to learn more and schedule an appointment in advance. We promise you’ll learn a lot about solar energy and have a blast—we sure did!