Elliott and the Ecology Lecture: Diving into the complex study of patterns in nature

Each year, the Howard Hughes Medical Institute in Chevy Chase has a Holiday Lecture Series on a different science topic. I was fortunate enough to be selected as one of the two Wootton High School delegates to attend this year’s series, Patterns and Processes in Ecology. The event consisted of six lectures led by ecology experts Dr. Robert M. Pringle and Dr. Corina Tarnita, who are conducting research across the globe as Princeton University Faculty in the Department of Ecology and Evolutionary Biology. 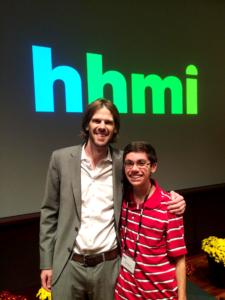 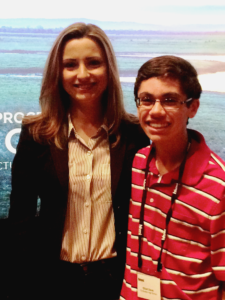 Below is my experience in each of the lectures, including what I learned, things that surprised me, and how I became inspired throughout the day at the Howard Hughes Medical Institute.

I was quickly surprised to find out how large of a role patterns play in nature. The various biomes (types of environments) I had learned about in AP Environmental Science were formed, in part, by patterns in climate. In this first lecture, Dr. Pringle focused on the savanna, a biome I knew very little about. 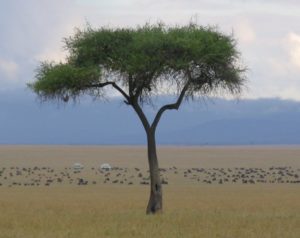 Savannas are areas where trees and grasses coexist and they make up 20% of the Earth’s land surface. While I expected a large portion of the world savannas to be in Africa, I was surprised to learn that 40% are in South America. Savannas are the last place with intact large mammal populations – such as elephants in Africa or capybaras (large rodents, like guinea pigs) in South America.

Relationships in the Savanna

There are many relationships among non-living and living parts of the savanna. A change to a non-living factor, such as rainfall, can have an impact on tree cover and the amount of wildfires. As rainfall increases, the percent of tree cover increases and the amount of wildfires decreases. The change in tree cover and wildfires can in turn impact non-living and living parts of the savanna ecosystem. These relationship patterns are studied by scientists and used to predict how small scale changes (seasonal rainfall amounts) and large scale changes (loss of large mammal populations) can impact the ecosystem.

The main takeaways from this lecture were that savannas are globally important ecosystems, biomes are not determined by climate alone, and living organisms play a large role in savannas.
[/toggle] [toggle title=”Plants and Termites”]

Dr. Tarnita introduced the ideas of patterns in nature by saying “when you look for patterns, you start seeing them everywhere,” from a tiny scale to an entire landscape. Dr. Tarnita presented multiple questions to get us thinking about patterns in an analytical sense:

Dr. Tarnita’s main messages included that patterns are present in nature, they are important, and understanding them can help us explain how an ecosystem functions. Take these two examples:

When there are no plants, water stays on the surface or is taken deep into the ground. But, with the presence of a plant, water moves just below the surface and is taken in by the plant. 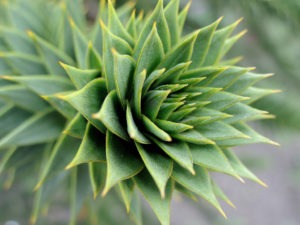 Water is a limiting factor that sets an optimal space range between plants in which no plant is too close to cause competition or too far to waste water. I was amazed that a mathematical formula could be used to determine how far plants would be distanced from one another. A formula can also be used to demonstrate how an ecosystem will decline with an insufficient amount of water.

Termites serve as “ecosystem engineers” by building huge mounds of dirt. As termites bring plant material to the mounds to eat, they are actually improving the soil. Termite movement churns the soil which releases nutrients to make it healthier. 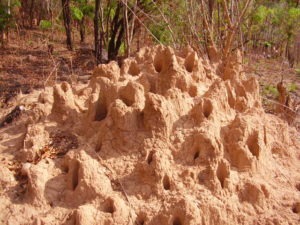 Within a termite colony, the king and queen have workers create and expand their mound. However, termite colonies collide and not all of them survive. The likeliness of a termite mound expansion can be determined based on its size. When colonies come into conflict, the larger one will conquer and the smaller one will die out.
[/toggle] [toggle title=”Complexity of Science Research”]

Dr. Pringle started the lecture by asking “How can similar species share the same habitat?” When two species have the same role, or niche, in an ecosystem, only the dominant one will survive. In response, species will adapt to live in different spaces or eat different foods to avoid competition.

If species adapt to competition by changing their food habits, how can scientists study this behavior and identify the patterns? It turns out, by studying animal poop!

Dr. Pringle explained the strategy for identifying what animals eat, known as “DNA Metabarcoding.” A device called a “Portable DNA Sequencer” detects food cells from animal waste and matches them to plants in a virtual library. This library includes over 245,000 plant species… that’s incredible! 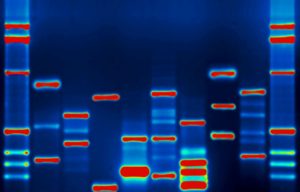 Because there are so many kinds of animals and plants, it can be difficult to have all the right tools and enough time to actually do the research. Even with so much already discovered, Dr. Pringle’s main takeaway was that there is still so much to learn about each species’ dietary patterns.
[/toggle] [toggle title=”Rapidly Changing Populations”]

Dr. Tarnita introduced the idea that human conflicts can effect animal populations. In the Mozambican Civil War in the 1970s and 80s, soldiers were stationed in Gorongosa National Park. Unfortunately, the harsh conditions of war led to large mammals being hunted for food and sold for money to support the troops. Elephant, waterbuck, and zebra populations dropped from the thousands to single digits. 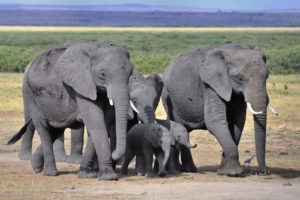 Interestingly, by the year 2014, these animal populations differed drastically: there were only 18 zebras but more than 30,000 waterbuck. Why would they not rebound equally?

Dr. Tarnita explained this could be rationalized through mathematical formulas. Although I couldn’t fully grasp the mathematical concepts, I realized that two different population growth models (exponential and logistic) could explain the variation. Dr. Tarnita highlighted that some species grow faster than others depending on their birth, death, and maturation rates. [/toggle] [toggle title=”Food Webs: Elephants and Math Come Together”]

Dr. Pringle and Dr. Tarnita began the lecture by discussing a familiar topic: food webs. Within a food chain (a specific “path” within a food web), organisms have different effects on one another. It was interesting to learn about an indirect effect within a food web: when the “highest” organisms eat the “middle” organisms, the “lower” organism population will increase with fewer predators. 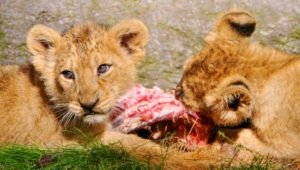 Photo by Tambako The Jaguar/Flickr

While this was slightly confusing at first, it made sense after Dr. Pringle and Dr. Tarnita explained the Green World hypothesis: ecosystems with more predators will have more vegetation. To test this hypothesis, an experiment was designed putting populations of various sizes on plots of land, and evaluating the amount of vegetation remaining after a certain period of time. The result was that plots of land with predators and herbivores had more plants remaining that those with just herbivores, supporting the hypothesis.
[/toggle] [toggle title=”Saving the Savanna, One Step at a Time”]

The title of Dr. Pringle’s first slide was a real wake-up call: Collapse of the World’s Largest Herbivores. I was shocked that Gorongosa National Park in Mozambique declined from potentially being “Africa’s greatest” game park to having nearly no buffalo in a matter of decades. 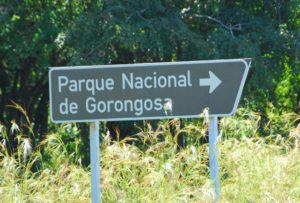 Fortunately, the Gorongosa Restoration Project is well underway. Many prospective solutions were discussed, but many of which were flawed. For example, bringing in more buffalo to restore its population has a high cost and would be stressful for the buffalo changing to a new environment. Similarly, I believe humans killing water buffalo would not only be unethical, but also ineffective as water buffalo do not compete with traditional buffalo anyway.

Three potentially viable solutions include introducing predators of buffalo’s competition, create safe buffalo grazing areas, and applying herbicides to protect their food. While no solution will ensure success, Dr. Pringle said that it is always important to explore the various options. 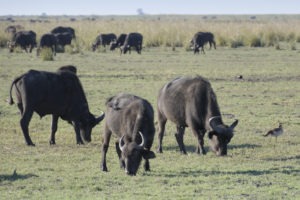 [/toggle] [toggle title=”What We Can Do to Support Scientific Research”]

How can researchers continue to learn about a specific habitat without being there in person? The answer is camera traps: cameras that take thousands to millions of photos from a certain place. They often used to gather in depth information about species in remote areas. 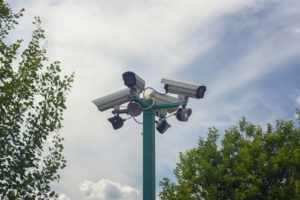 While massive quantities of pictures present valuable data, searching through them can be very time-consuming. That is why organizations such as Zooniverse provide opportunities for anyone to contribute to scientific research. Anyone can volunteer to identify what animals are present in various images. Having this information, researchers can use charts and graphs to find patterns between the presence of certain animals and other ecological characteristics.
[/toggle] [/toggles] After the lectures concluded, we had a panel discussion about any questions attendees had. I asked about each of the lecturers’ backgrounds and what motivated them to take part in ecological research. It was fascinating hearing how they had started off in such diverse fields, from mathematics to biology, but their paths all converged in learning about patterns and processes in ecology.

I want to give a big thank you to Ms. Adler, Wootton High School’s Science Internship Coordinator, for selecting me to attend this event. I learned so much throughout the day, and am even more excited to continue exploring the environment through my academics moving forward.

If you would like to learn more about HHMI’s BioInteractive Patterns and Processes in Ecology Lecture Series, please click here.

Written By: Elliott Davis, Senior at Wootton High School in Rockville and Intern at the Montgomery County Department of Environmental Protection

9 comments on "Elliott and the Ecology Lecture: Diving into the complex study of patterns in nature"