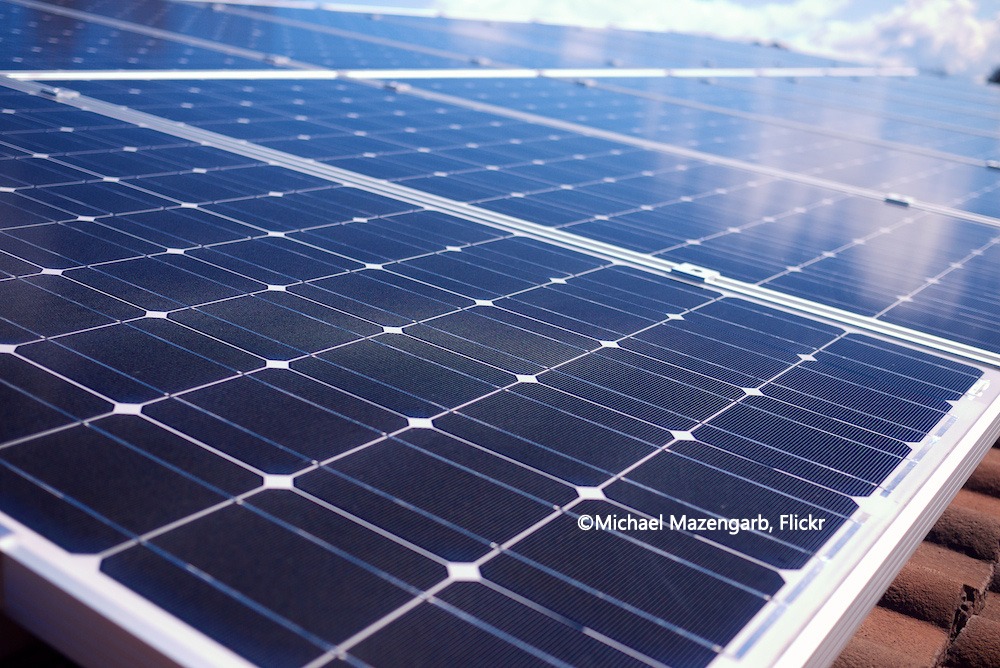 There’s a time and a place for everything. If you listen to Joyce Breiner and David Yaney, the time for solar is now.

“People think it’s a lot farther into the future than it is,” Joyce said. “But it’s not. It’s here today.”

It’s not hard to detect the enthusiasm this married couple has for the subject. Just ask for a tour of their Poolesville home or a test-drive of one of their electric cars. And while they are definitely early adopters, they aren’t dogmatic environmentalists or wealthy one-percenters. They just made a conscious decision to take advantage of technologies that are increasingly available to just about anyone who wants to use them.

“We wanted to do the right thing and wanted it to make basic financial sense,” David said. “We wanted to do something where we could say we weren’t just standing around talking about the problem.”

Joyce Breiner, David Yaney, and their son pose outside of their solar powered home with their electric vehicles.

About three years ago, Joyce and David, a former air traffic controller and an electrical engineer, respectively, laid down a little challenge for themselves: try to live a “net-zero” lifestyle, in which they used no fossil fuels in their day-to-day lives.

Almost 70 solar panels and two electric cars later, they’re just about there. Although they still use natural gas for heat and some gasoline for the cars, Joyce and David say they now actually produce more power than they use.

Let’s do the numbers

The savings are substantial. Joyce and David—who leased 52 panels in 2012 for an up-front cost of about $16,500 and purchased outright 17 additional panels last fall for about $12,000 after a $5,000 federal tax credit—expect to realize a full return on their investment in as little as five years, when factoring in gasoline savings. When the experiment began, their monthly electric bill was about $150, Breiner estimates. Today, it is $5.36, thanks to a few administrative costs.

The metering hub on the side of the house.

Maryland residents and businesses that produce more solar power than they consume have the option of selling the excess energy on the open market as Solar Renewable Energy Certificates (SRECs). Maryland’s Renewable Portfolio Standard requires that 2 percent (or about 1,200 megawatts) of the state’s energy comes from solar sources by 2020. According to data from the Maryland Energy Administration, as of late 2013 the state had reached about 158 megawatts of production capacity.

New interest and technology are making these solar energy goals—and the solar panels themselves—more accessible. A number of vendors, including several in Montgomery County, can lease or sell panels to residents and businesses with minimal out-of-pocket expense. Installation is often finished in one day. (Not all locations are ideal for solar: south-facing areas are the best in theory, though viability can differ based on many variables.)

Ready for your own solar journey?

Start your journey by seeking a vendor with experience in your segment of the market and a solid reputation among customers (various online “paper trails” can help on this front). Many installers will assess your home’s solar suitability for free or a small fee.

Ultimately, with the price of solar going down and other less-renewable options trending upward in price—not to mention other costs—harnessing the sun is a bright decision.

“No one thinks traditional energy costs are going to stay the same or go down over the long term,” Joyce said. “When you invest in something, you want to say ‘I believe in this.’ That’s what makes it worth an investment.”