Lighting up your home with LED light bulbs 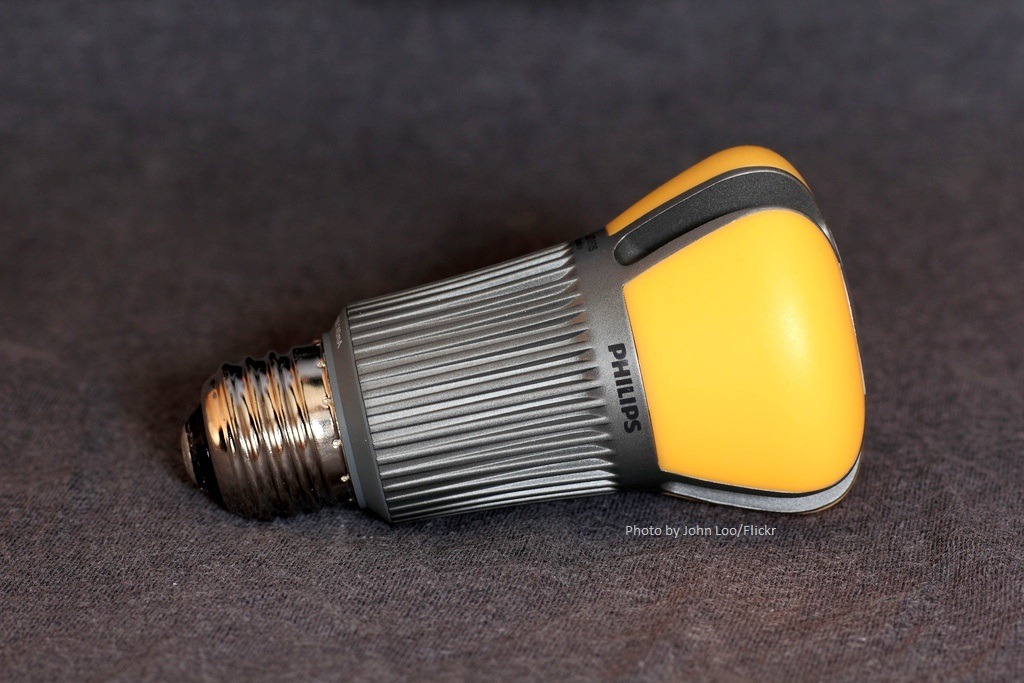 We rely on lights in our homes for plenty of purposes—task lighting to finish up homework, outdoor flood lights to see at night, or a fancy chandelier to enjoy a nice meal at home. Lighting can account for 14 percent of total electricity use in our homes, according to the EIA. To cut down on that energy use, families are turning to LED (light-emitting diode) lights.

DEP has put together a handy guide to help you pick the right LED bulb for your needs:

LED light bulbs are one of the best forms of light for your home or office. Compared to less-efficient bulbs that emit light everywhere, LED light bulbs are more efficient by emitting light in a particular direction. What needs to be lit will still be bright, just without wasting energy. They are also very versatile and can be used in a variety of lighting situations inside and outside of your home.

LEDs also last significantly longer than other light bulbs, for approximately 50,000 hours. If used for 8 hours a day, an LED bulb could last more than 17 years! For “Going Green,” this means less energy and materials will be needed for replacement bulbs.

Another major benefit of LEDs is that they cost much less long-term than other light bulbs. Specifically, each bulb would save between $80 and $540 over its lifetime, depending on the type of bulb it replaces. LEDs also prevent heat build-up which helps your energy bill by lowering air conditioning costs, and you won’t burn your hand touching one when in use. For the environment, hundreds to thousands of kilowatt-hours of energy will be saved every year by making the switch, being 80% more efficient. Plus, LEDs contain no toxic elements, such as mercury, that other bulbs may contain.

Anytime is a good time to switch to LEDs. The best place to start your transition is by making a trip to the local hardware store or supermarket to stock up on LEDs. That way you can easily replace with LEDs when an old incandescent or CFL burns out.  For more immediate energy and money savings, switch out all your lighting at once.

Many people use home projects as the catalyst for updating lighting. As part of a home renovation project, make your refurbished or newly developed room modern and energy efficient with LED light bulbs. Also, a move to a new home or apartment presents a great opportunity to make the switch.

[/toggle] [toggle title=”Will LEDs fit my current fixtures?”]Buying the correct light bulb for the correct fixture may seem overwhelming. There are so many options to choose from. But rather than stressing out about confirming your LED light bulb will fit in your fixture, bring in your current light bulb to the store. As long as the light bulb you currently have and the one that you are interested in have the same base and similar light output (discussed below), you are all set. LED light bulbs work in a majority of fixtures, but this step will ensure you make the right decision. [/toggle] [toggle title=”How to read a light bulb label”]

In order to learn more information about a food product, you’ll probably look at the nutrition label on the back. You will find measurements of all sorts, including the amount of calories, total fat, and protein, as well as the ingredients list. Similarly, on a lighting label for a light bulb, you will find everything you need to know – including brightness, estimated yearly energy cost, life, light appearance, and energy used.

Although LED light bulbs are more energy efficient, that doesn’t mean that they give off less light. In fact, many LED bulbs are brighter than their equivalents. To ensure that your new LED light bulb is as bright as or brighter than your old bulb, use the following chart that will convert your old bulbs “watts” to LED “lumens,” the unit of how much light is generated.

Each label with have basic information about annual operating costs, based on 3 hours per day, 11 cents per Kilowatt Hour (however, the total cost will depend on your local energy rates and how much you use your bulbs). This cost will likely be substantially lower than your current bulb, but try to find the lowest among the LED bulbs also to maximize your cost savings.

Keep in mind that while the initial price of LED bulbs may be higher, rebates and reduced energy usage make LEDs much cheaper over their lifespan, and save large quantities of energy each year along the way. Pepco’s lighting program, for example, offers a rebate on ENERGY STAR Certified LED bulbs and fixtures ($7 per bulb and $10 per fixture). Learn more about available lighting rebates.

An LED bulb’s lighting label will give you helpful information about how long your bulb will last (if used for 3 hours a day). Most LED light bulbs will have a lifetime of 17 years or more. But, if you are deciding between two bulbs, it is the safe bet to purchase the one that will last the longest.

LED light bulbs use significantly less energy than a standard light bulb. Based on the watts of your current bulb, you can determine the range of the quantity of energy used for your new LED bulb that will suit your light fixture. Use these charts from The Greater Cincinnati Energy Alliance to compare energy efficiency, energy cost, and light output among types of light bulbs.

The color light that your LED light bulb produces depends on the emitter temperature, measured in Kelvin (K).

Checking if a light bulb has an ENERGY STAR Certification is the best way to determine if the bulb meets high energy, economic, and efficiency standard.

To receive this certification, the light bulb must “Use about 70-90% less energy than traditional incandescent bulbs, last 10 to 25 times longer and saves $30 to $80 in electricity costs over its lifetime, meet strict quality and efficiency standards that are tested by accredited labs and certified by a third party, and produce about 70-90% less heat, so it’s safer to operate and can cut energy costs associated with home cooling.” If a light bulb has the symbol below, you know you’re buying a quality, energy-efficient bulb backed by the EPA.

[/toggle][toggle title=”Check out the options”]While LED light bulbs share some characteristics, it is important to recognize that not all of them have the same features. For example, not all LEDs are capable of dimming. If that is a feature you want, make sure to check if the light bulb you are interested in buying does this. As discussed earlier, include the desired color and brightness as factors of your selection process. For frequently asked questions, please see bulbs.com.[/toggle] [/toggles]

Energy consumption is a major challenge facing our country, but you can help. Every fewer Watt consumed makes a difference, so switching to LED light bulbs and encouraging your friends and family to do the same will make a significant impact. Let’s save money and the environment by transitioning to LED light bulbs, the best lighting technology available.

Intern at the Montgomery County Department of Environmental Protection

3 comments on "Lighting up your home with LED light bulbs"