Pepco WaterShed Center: The home of the future 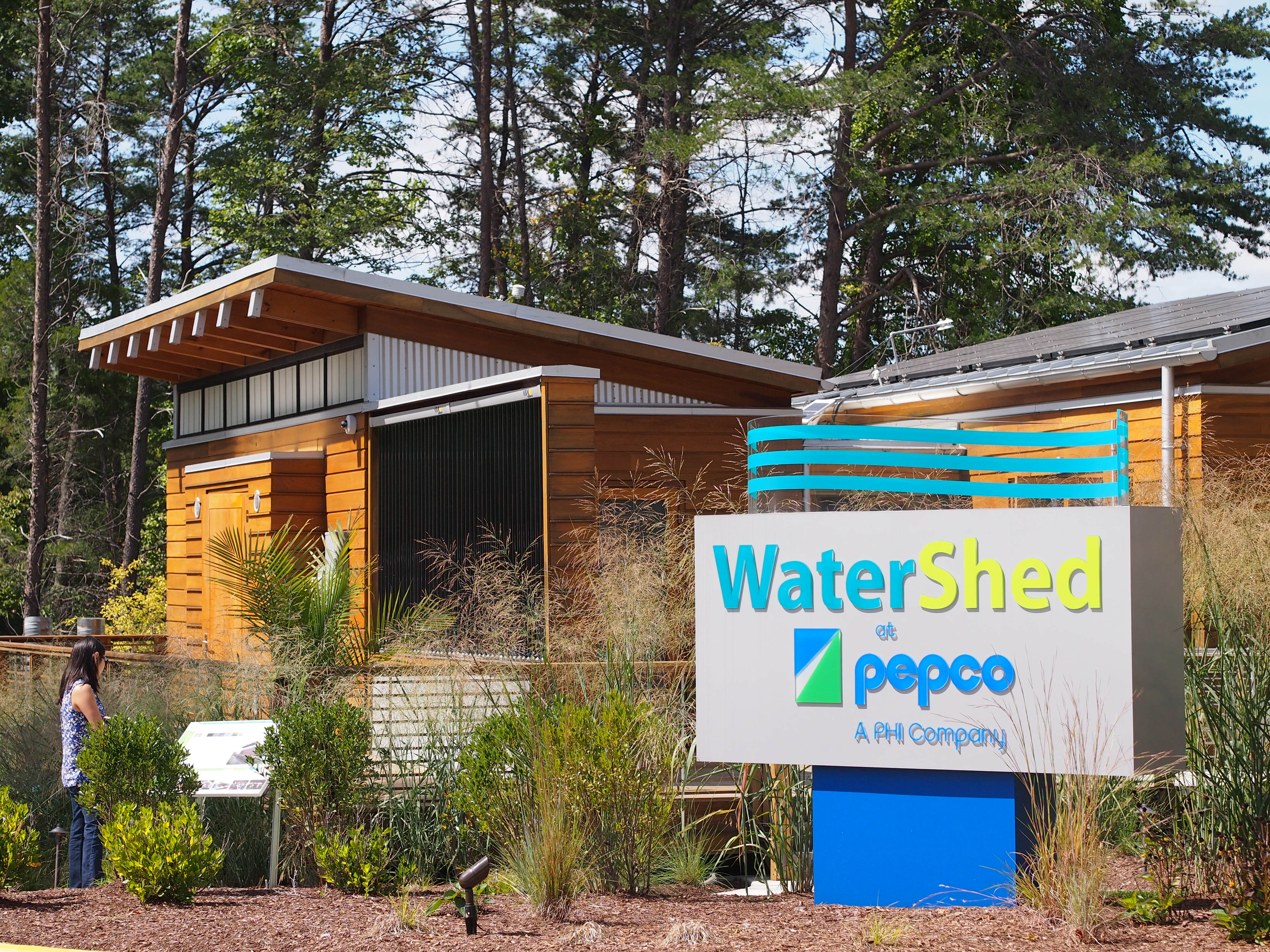 Want to see the house of tomorrow? It’s here in Rockville today, and it’s free and open to visitors.

Tucked away on a secluded stretch of Gude Drive in Rockville is the Montgomery County service center for Pepco. Unless you’re paying your bill or lodging a comment, you may not think there’s much of a reason for the rank-and-file citizen to seek it out.

Before Earth Day 2014, you might have been right. But now there’s the Pepco WaterShed Sustainability Center. It’s a model home that is full self-sustaining in energy and water use—also known as a “net zero” facility—and a visitor’s center with hands-on experiments and meeting space. 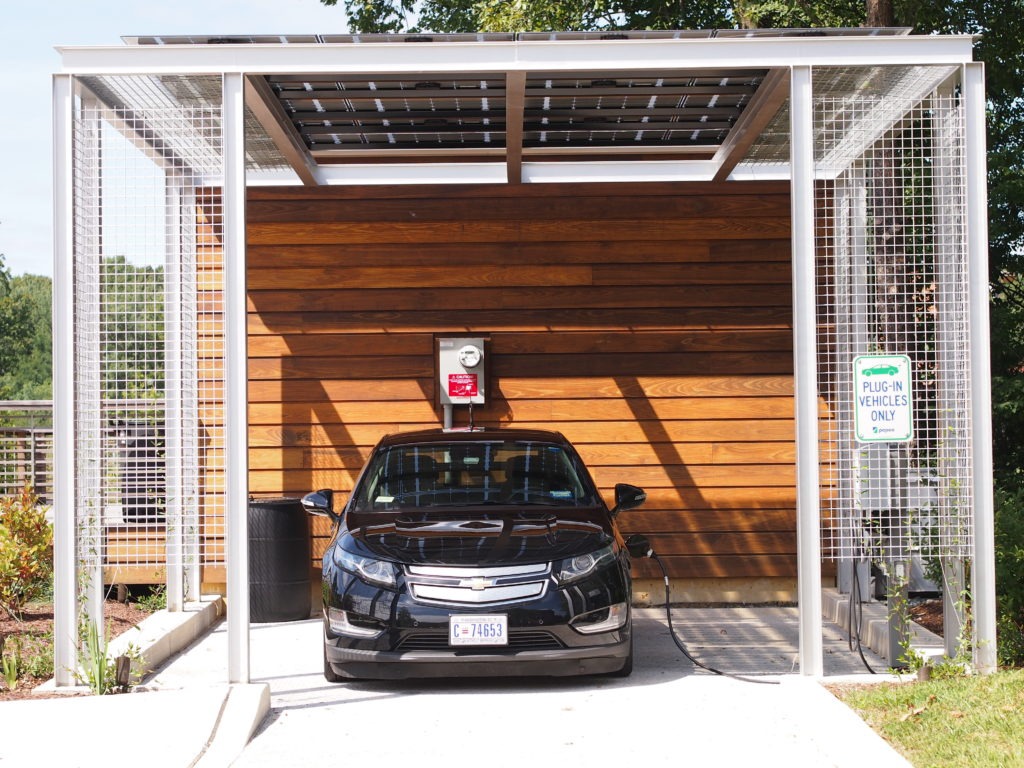 The electric vehicle carport at the WaterShed Center has solar panels on top and vertical gardens that help capture and filter rain water.

The home was originally conceived as part of the 2011 Solar Decathlon, a contest created by the U.S. Department of Energy. A group of University of Maryland graduate students, Tjaden included, set to work on their entry. WaterShed was the fruit of their labors. The house won the competition and was acquired by Pepco in 2012.

According to Scott Tjaden, the WaterShed site manager for Pepco, about 75 visitors pass through the center each week, ranging from families to business groups to curious passersby.

“It was a competition to think about the house of the future,” Tjaden said. “They wanted to know what it looked like and how it would work.”

Now, Tjaden said, WaterShed’s main mission is educating and engaging people on energy efficiency, better water management, smarter building materials and other components of the optimally efficient home. The house is fully stocked with streamlined appliances and furnishings, not to mention several solar panels that help to power the home, which is set to operate as if a family was really in residence.

“Everything is fully functional, and runs a certain number of hours every day,” Tjaden said. “It has to mimic the scenario of someone actually living here.” 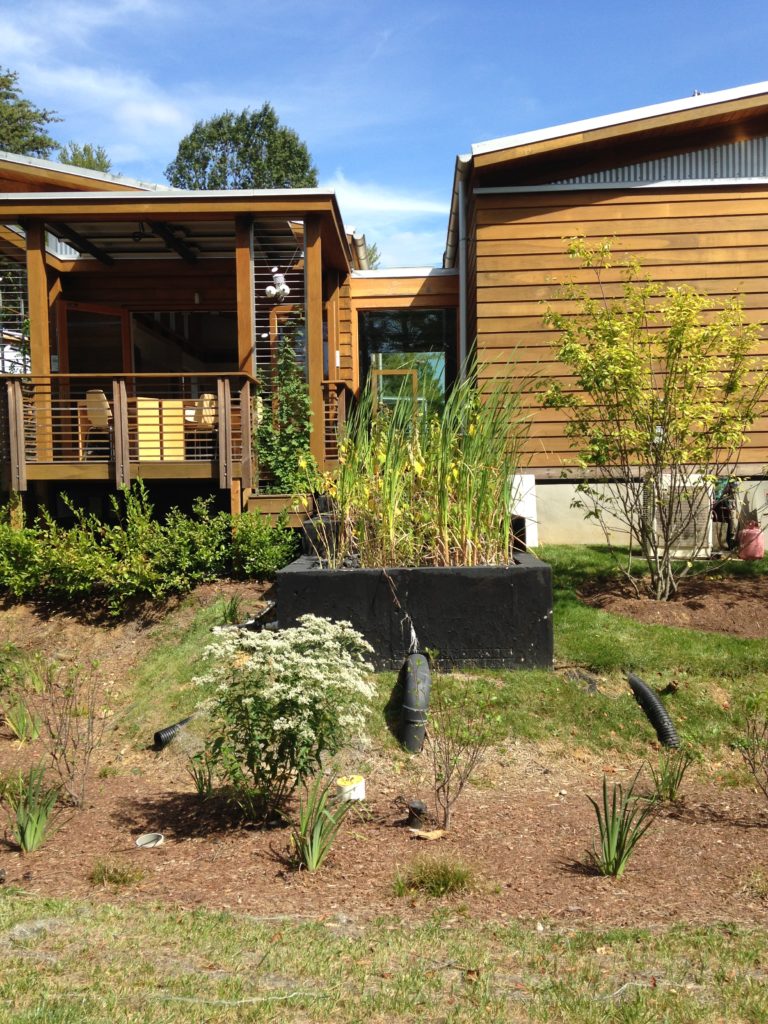 Constructed wetlands in the back of the house capture stormwater and greywater from sinks and showers.

As WaterShed’s name implies, managing water is a key component of the project.

“Being close to the Chesapeake Bay, we wanted to think about a property’s impact on water, both improving water quality and reducing water quantity downstream,” Tjaden said.

Amenities in the house that are designed to improve water use and stormwater management include:

* A 312-square-foot green roof of drought-tolerant plant species, which slows and filters water flow;
* “Vertical gardens” in the electric car charging port and elsewhere provide shade and capture stormwater runoff; and
* Constructed wetlands filter and capture stormwater as well as “greywater,” or used water from indoor sinks and showers. Used for irrigation, this captured water reduces fresh water consumption by 30-50 percent per year.

Tjaden estimates the cost of the house itself (not including the property on which it sits) at about $320,000. That’s substantially higher than a regular house today, but would still equate to a money saver over time. Most of that savings would come in the form of energy efficiencies in the house, consisting of:

* 42 photovoltaic solar panels generating up to 9.24 kW of electricity each day;
* 34 percent energy savings thanks to HVAC energy recovery systems;
* 60° of temperature reduction on the roof during the summer, thanks to green plantings;
* High-efficiency LED bulbs;
* Two mini-split heat pumps.

Forty-two photovoltaic solar panels generate up to 9.24 kW of electricity each day.

This is just a sampling of the ways in which the WaterShed is a model of clean living. Want to learn more? Visit the center at 201 West Gude Drive in Rockville. Guided tours are available Monday through Friday, 10 a.m. to 3 p.m.

2 comments on "Pepco WaterShed Center: The home of the future"