Takoma Park is about to become a hotspot for electric vehicle drivers.

Electric vehicles (EV) are on the rise. According to Plug In America, an industry coalition, higher availability and lower price points have driven more than 400,000 American motorists to switch to EVs. Proponents have long touted EVs for their ability to reduce the use of fossil fuels. The conundrum many have to consider, however, is that although EVs undoubtedly conserve gasoline and are better for the Earth than their gas-fueled counterparts, their green power can be mitigated somewhat if a power plant is generating electricity with dirty sources.

The government of Takoma Park has solved that conundrum.

Not only did the city just install 14 EV charging stations (each one free to all users), but all the electricity those stations deliver is wind-generated. That means any EV driver who powers up in Takoma Park is fueling his or her vehicle solely with green energy.

“Takoma Park residents are excited for the new opportunity to charge their electric cars at one of the 14 new stations on city property,” said Takoma Park Mayor Kate Stewart. “Takoma Park purchases 100 percent wind power, so residents will be powering their cars with clean, renewable energy. Making it easier for people to plug in will help more residents make the switch to electric cars, and ultimately help the city meet its substantial goals to reduce greenhouse gas emissions.” 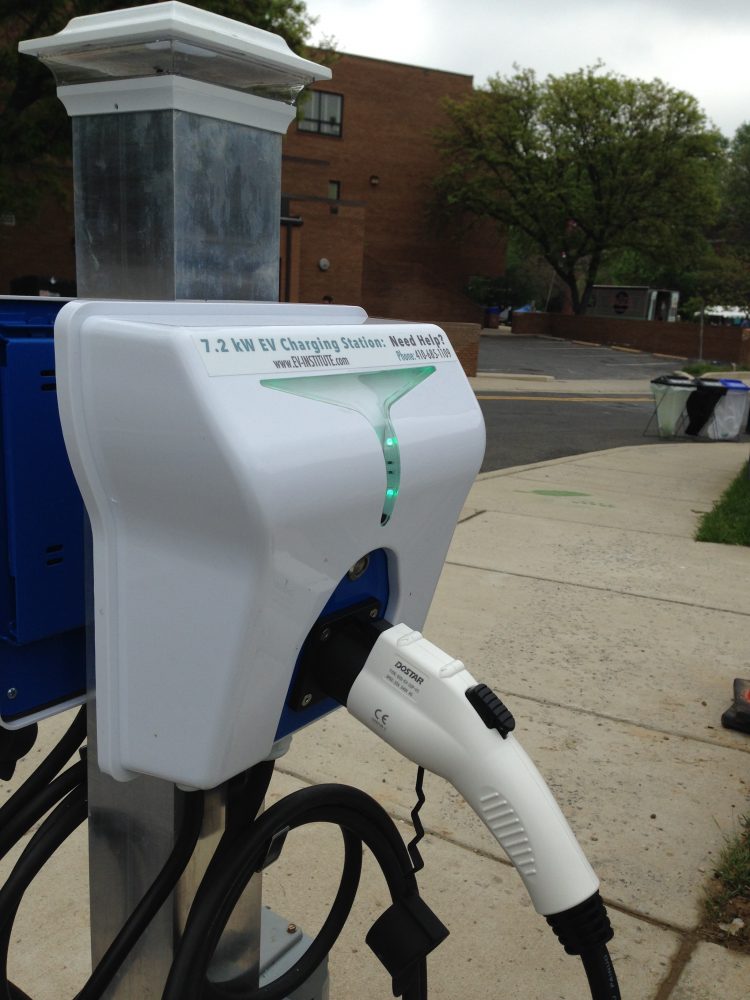 As if that wasn’t enough to make residents happy, funding the project won’t require a great deal of taxpayer dollars. The Electric Vehicle Institute, an EV supply equipment company based in Baltimore, is donating the stations and the labor as part of an effort to foster EV use in the region.

“Our agreement with Electric Vehicle Institute made the stations free, including installation, and three years of maintenance,” said Gina Mathias, Takoma Park’s sustainability manager. “We want to be sure to thank them for being such great partners, and making this project possible.” 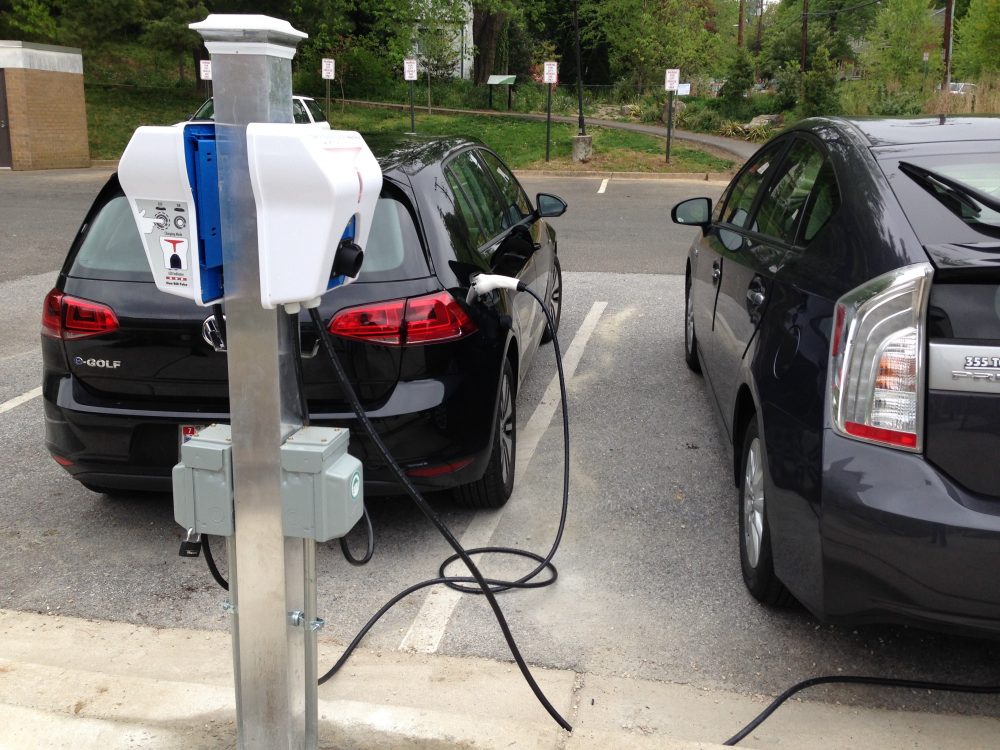 One of the institute’s key goals is to install as many stations as possible to help combat “range anxiety,” or the fear EV drivers have of running out of juice away from home base.

“Easy adoption is our mission statement,” said Matthew Wade, the institute’s president and CEO. “[Takoma Park] is a community of forward-looking people that want to do things for the environment. Working with them was obvious.”

Mathias estimated that each charging station—all of which are designed to be compatible with more or less every EV model—can charge 70 percent of an EV battery in about two hours. 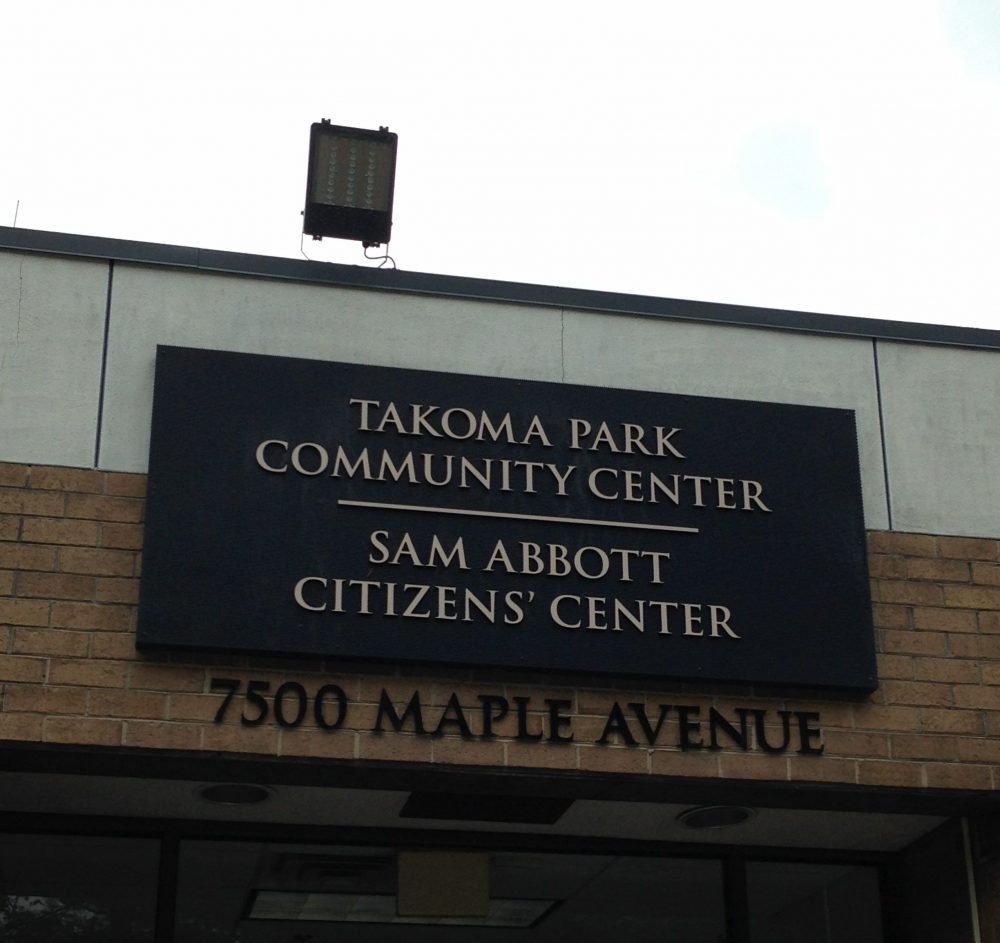 The stations are installed in the following city locations around Takoma Park:

For now, there are no restrictions on who may use the stations or how often, but city officials may impose a fee or membership program down the line if demand dictates, Mathias said.

Takoma Park has committed to reducing city-wide greenhouse gas emissions, and mapped out their greenhouse gas reduction strategy in their Sustainable Energy Action Plan. The one-two punch of free EV charging with 100 percent wind power will help them achieve a number of goals in that effort.

“We want to encourage the growth and adoption of electric vehicles, so we’re making the effort to set up the infrastructure,” said Mathias. “It helps with meeting our greenhouse gas reduction goals. Anything we can do to help us get as close to zero as possible is what we want to do, and this is a big step toward that.”

According to Mathias, city officials also are interested in installing EV stations on private commercial property in the city. For more information on installing or using new EV stations in Takoma Park, contact Mathias at ginam@takomaparkmd.gov or 301-891-7623, or visit https://takomaparkmd.gov/government/sustainability.

Scott Harris is a freelance writer who lives in Montgomery County and covers the environment and other topics. Scott may be reached at scottharriswriter@gmail.com.