A civic building is more than just a place to hold meetings. In Silver Spring, it means a chance to demonstrate values and sustainable living.

The Silver Spring Civic Building (SSCB) has recently undergone a host of changes and upgrades to make it greener and more attractive to users, visitors, and citizens alike. As such, it has become a local attraction as well as a reflection of local values.

“It very much has a community feel, but also the feel of an event venue,” said building operations manager Eric Rasch. “Folks come in from all ages and all walks of life. People come to Silver Spring and they come in here knowing it’s a good place, and it’s sustainable. It gives them a good feeling.” 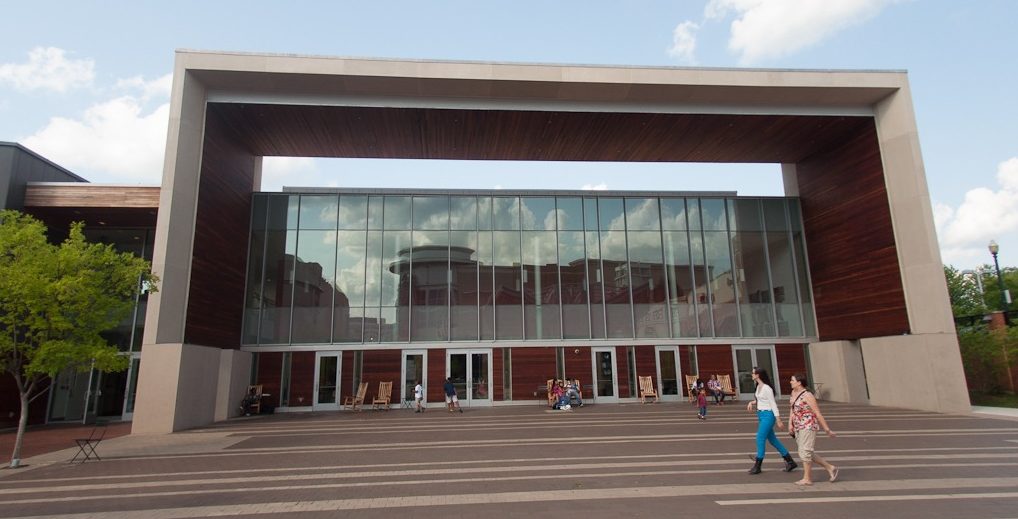 The exterior of the SSCB. Photo courtesy of Flickr user Shardayyy.

The building, located downtown in the city’s Veterans Plaza—and designated last year by Washingtonian magazine as one of four area buildings that will be beloved landmarks someday—first opened in 2010 and has since played host to innumerable meetings, banquets, concerts, and more.

In the past six months, they’ve made sustainability changes large and small. According to leaders at SSCB and the county, it reflects Silver Spring’s collective desire to be green, as well as the county’s larger environmental plan for public buildings.

Among the changes already in place, Rasch talks most excitedly about recycling. It’s not the most glamorous thing, but it’s no small feat in a building as large as the 13,600-square-foot SSCB, especially not when you’re doing it to this extent.

According to Rasch, SSCB recycles 50 percent of its waste stream—significantly higher than the average for an equivalent facility.

“One of the things we really emphasize is recycling,” Rasch noted. “There is lots of paper, waste, glass, all types of stuff that need to be recycled.” 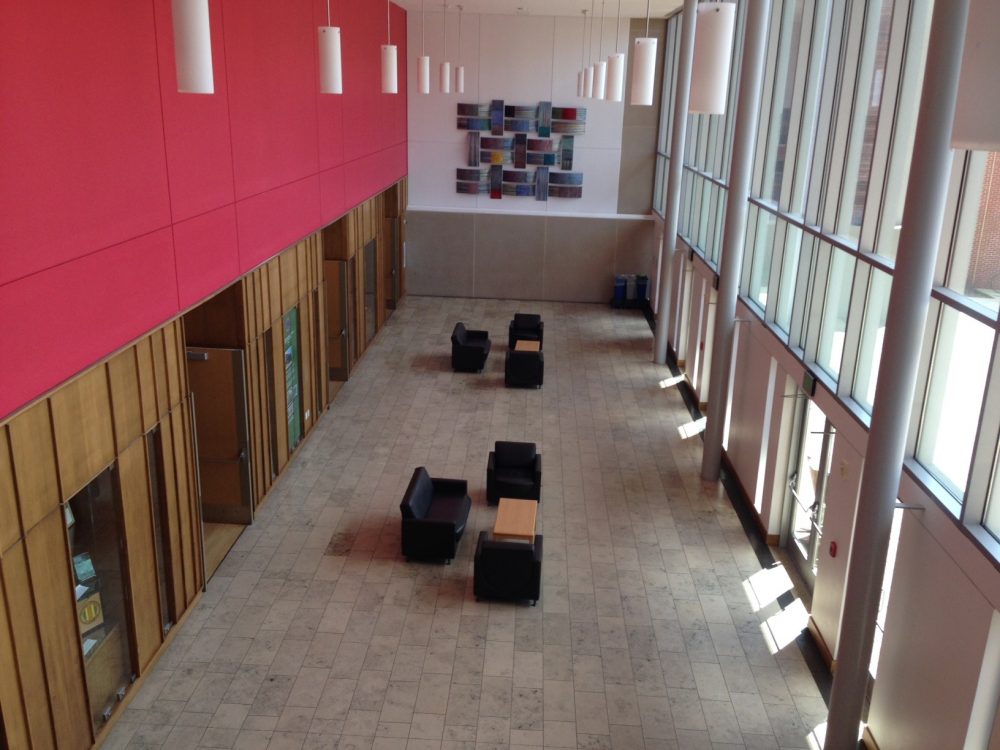 The lobby of the SSCB.

The building’s recycling efforts range from the ostensibly mundane to the cutting-edge. Some examples include:

Other sustainability measures at SSCB have varying degrees of visibility. For example, everyone can see the building’s exterior made from Ipe wood, a highly durable wood originating from a popular (and, now, sustainably forested) species of tree native to Brazil and other nearby nations.

Less visible but perhaps even more impactful is the magnetic-bearing chiller that helps cool the building down. Compared with more traditional technology, this kind of chiller reduces friction (and, thus, the amount of heat the chiller must reduce) and lasts longer.

Solar energy is about to power a lot more than waste receptacles at SSCB.

On March 22, officials flipped the switch on 128 solar modules, which were placed on the building’s roof. Together, they will produce more than 49,0000 kWh of renewable electricity each year—the equivalent, from a carbon-emissions standpoint, of taking seven cars off the road or planting 17,000 new trees. 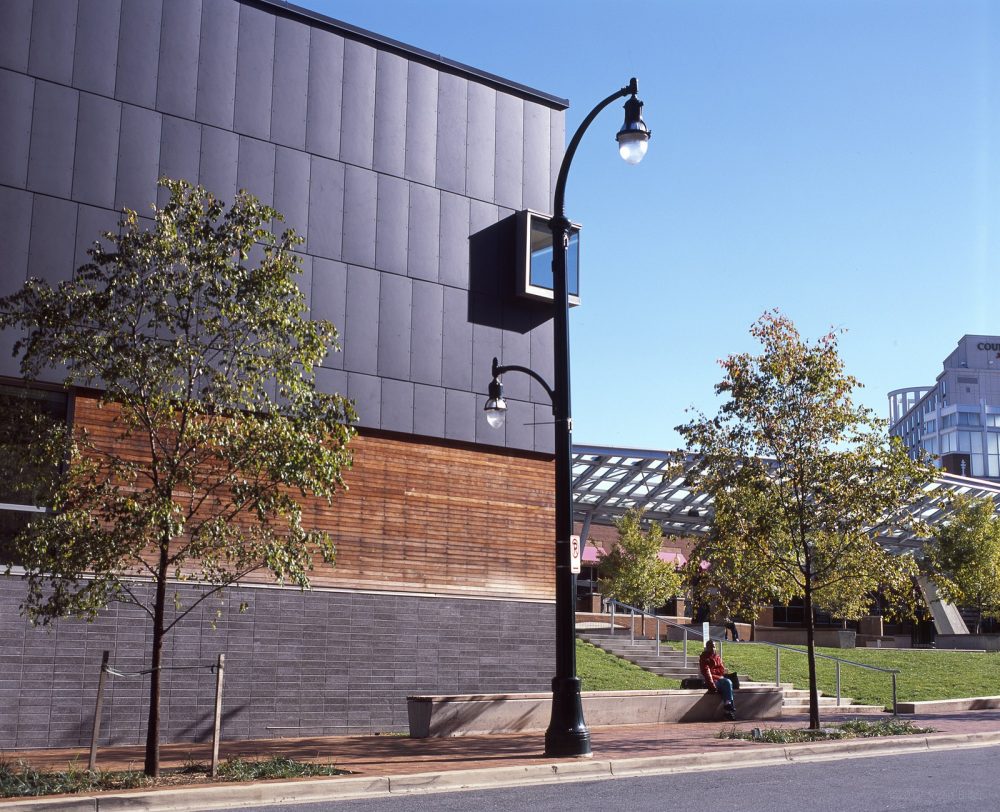 The exterior of the SSCB. Photo courtesy of Flickr user Ryan Biller.

According to Eric Coffman, chief of the Office of Energy and Sustainability in the Montgomery County Department of General Services, SSCB is one of the first county buildings to receive solar panels, but far from the last. This is the first phase of a larger goal to install six megawatts (6 MW) worth of solar energy across 12-14 county facilities. Over the next 20 years, Coffman said the plan is intended to save the county $11 million in energy expenditures and create 100 jobs.

The SSCB, and Silver Spring in general, made sense as a starting point for the project.

“This is one of the earlier buildings where we really applied a super-deep, green overhaul,” Coffman said. “It’s part of the culture of Silver Spring. It’s a community that’s very vocal in a good way about being sustainable and walkable.”

Symbolically and almost literally, SSCB sits at the intersection of sustainability’s disparate elements, both fostering and reflecting community engagement. Taking it a step farther, SSCB will serve as the host venue for the 3rd annual Montgomery County Energy Summit on Tuesday, April 5—an event co-hosted with the U.S. Green Building Council’s National Capital Region about commercial building energy issues in the county.

“It’s the broader definition of sustainability,” Coffman said. “That means people, planet, and profit. This has parts of all of that.”

Scott Harris is a freelance writer who lives in Montgomery County and covers the environment and other topics. Scott may be reached at scottharriswriter@gmail.com.