Music Center at Strathmore is ready for its sustainability close-up

Every year, some of the top names in performing arts make their way to the Music Center at Strathmore. The Beach Boys’ Brian Wilson, late singing legend Natalie Cole, the Baltimore Symphony Orchestra and many other acts across a range of genres have taken the stage at the North Bethesda venue.

On top of that, more than 110,000 people walk through Strathmore’s doors each year on average. Many of those patrons are Montgomery County residents.

That popularity was a key driver for County officials’ recent decision to put Strathmore in the sustainability spotlight.

“The amount of visibility and traffic that Strathmore gets makes it a nice way to show our county constituents that we’re being good stewards of the County’s money,” said Isami C. Ayala-Collazo, chief of Montgomery County Department of General Services Division of Facilities Management. “Our staff were being called in frequently to replace burned-out bulbs. We recognized there would be a significant cost savings from longer-lasting and more energy efficient bulbs, freeing up our staff to address other critical needs at Strathmore and across the county’s portfolio of properties.” 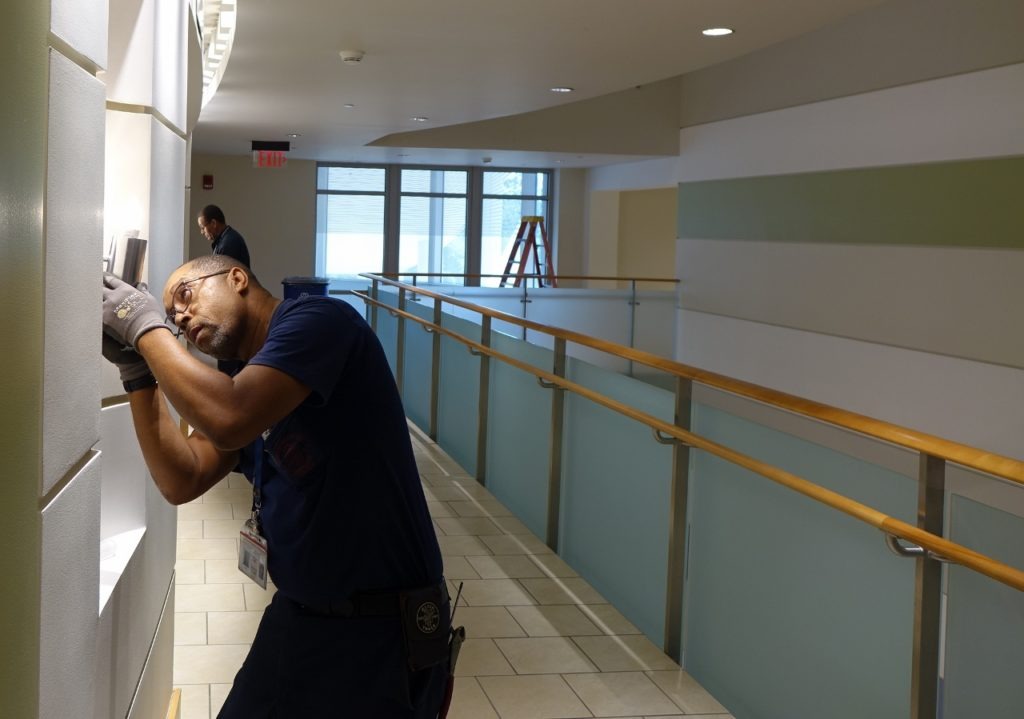 Light bulbs being safely removed by Karl Tibbs, Electrician with the County’s Department of General Services, Division of Facilities Management

LEDs with a Breakthrough Performance

“With the maturity of LED technology, we can deliver energy savings while ensuring visually appealing lighting.” said Chris Weatherly, energy program manager with the Montgomery County Department of General Services Office of Energy and Sustainability. “In fact, LEDs use at least 75% less power than incandescent bulbs. They also produce very little heat, which means less energy is needed to keep the building cool. The environmental benefits are tremendous.” 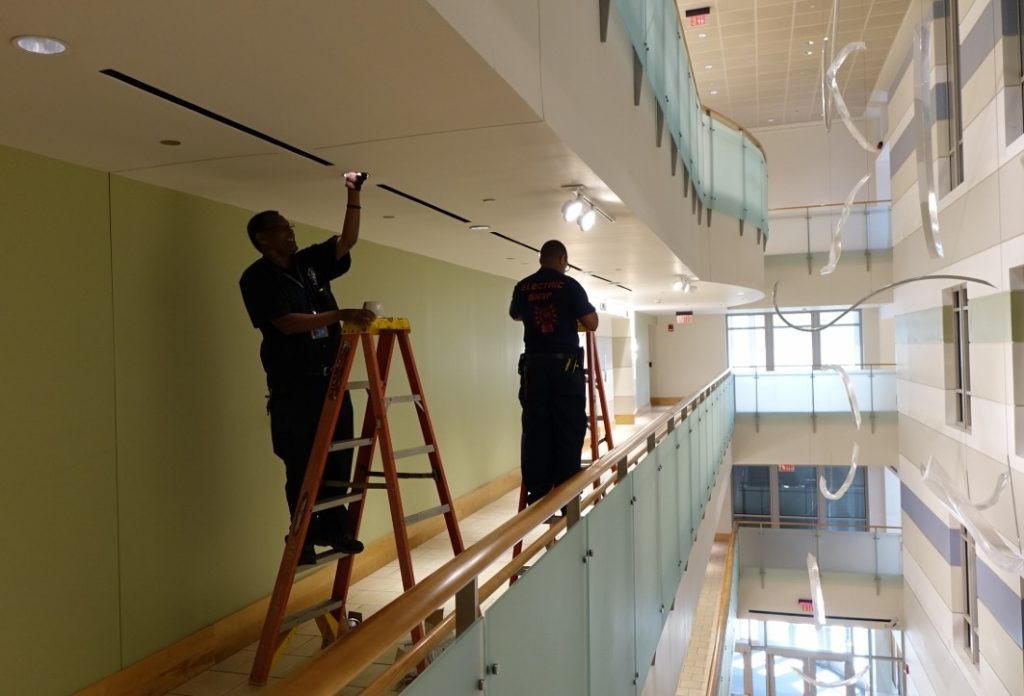 Once the upgrade project is complete in fall 2016, 1,593 light fixtures in the concert hall will have been fitted with higher-efficiency LED bulbs. These lighting changes are expected to reduce greenhouse gas emissions by 533 metric tons each year. That provides as much environmental benefit as planting 13,000 trees or taking 100 cars off the road.

Setting the Stage for Energy Savings

What’s more, the changes will result in $93,203 of taxpayer money going back into county coffers each year—not bad for changing a few light bulbs.

Opened in 2003, the approximately 20,000-square-foot, 2,000-foot concert hall is in operation 5,400 hours each year, or about 62 percent of the 8,760 total possible hours on the calendar. That makes it the fourth-largest electricity user among all County buildings, and that means a big chance for reducing energy costs and consumption. Officials expect the project to pay for itself in about two years.

Along with the financial savings that are projected to accumulate because of the upgrade itself, the County will also receive special incentive payments from Pepco reducing the upfront investment. The Maryland Energy Administration’s Maryland Smart Energy Community Program also provided $63,646 of funding to implement the project.

Before and after photos of Strathmore’s LED lighting upgrade

Benchmarking Energy Use as a First Step

Even when the technology is intuitively better, it’s always a good idea to let data be your guide. That’s where the County’s new energy benchmarking initiative comes into play.

Montgomery County adopted the energy benchmarking law in 2014, with the first deadline for private buildings occurring June 1, 2016. The County led by example by benchmarking its own buildings in 2015. Strathmore’s LED fixture upgrade is an outgrowth of its participation in the benchmarking initiative.

“The kind of data you collect for benchmarking helps you discover things,” said Leah Miller, sustainability program manager with the County’s Office of Energy and Sustainability within the Department of General Services. “You can see what your energy use is, then compare it to others by square footage and building type.”

For an organization as focused on outreach and education as Strathmore—more than 5,000 community members took advantage of one of the organization’s education classes or workshops in 2014 alone—setting an example on benchmarking specifically and environmental sustainability in general was a logical fit.

By Scott Harris. Scott is a freelance writer who lives in Montgomery County and covers the environment and other topics. He may be reached at scottharriswriter@gmail.com.