Our family moved from central Pennsylvania to Montgomery County in 1998.  Like many relocating families, our first priorities were access to work and schools, not energy efficiency.

Our new house In Montgomery County was built in 1958 and is described as a back-to-front split level.  The entrance to the house is at the level of the living room dining room and kitchen.  To the back of the house, the bedrooms were up a half a flight.  Down a half a flight were a family room, another bedroom, laundry room and half bath. 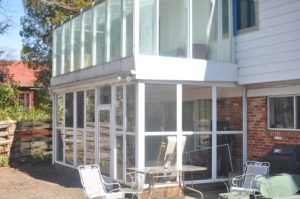 A view of the back of our house with the sunroom and screened in porch.

Although it is a beautiful house that was perfect for us commuting to work, and near good schools, the list of energy challenges was daunting.

Improving the energy efficiency of our house did not happen immediately – it took years.

The first thing we did was upgrade the AC unit a few years after we moved in. The difference in energy savings was astounding.  We could now set and forget our AC unit and yet hardly noticed a difference in our electric bill.

Get an Energy Audit

Some years later, our son was studying for a Master’s degree in Sustainable Building Design and took it upon himself to do an energy audit.  We learned that the house had no insulation in the walls and very little insulation in the roof.  The results explained why the upstairs was simply impossible to cool on the hottest days and the downstairs family room area was impossible to heat in the winter without turning on the gas fireplace in the family room.

The energy audit pointed to one relatively easy fix.  Calking and insulating along the basement sill plate greatly reduced the major source of draft and made the house noticeably more comfortable.

Nevertheless, after talking with several contractors, we couldn’t afford to do all that we wanted to, and needed to do, at once.  We tackled the entrance level first, coupling a kitchen remodel with new windows and doors and foam insulation in the walls and the kitchen ceiling.  We also applied foam insulation to our 200-square foot living room wall with a northern exposure.  The energy audit had revealed that this large cold wall was the second major source of draft in the house.

The kitchen and living room insulation project greatly improved the comfort in the house by reducing drafts and allowing ventilation in moderate weather.  But the family room and bedroom areas were still difficult to heat and cool.

A few things converged to prompt us to act on those as well.  The sunroom began to leak and our son had graduated from college freeing up our finances so that we could take out a home improvement loan.

We tore down the sunroom and porch and bumped out the family room and bedroom areas to fill the same footprint.  Because much of the project was new space, this time we used ROXUL insulation.  Not only is a greener product than traditional fiberglass insulation, the installers appreciate that it is less noxious to install.  When we replaced the roof, we added yet more insulation.

The HVAC contractor was concerned that the existing unit would not be sufficient to heat and cool the extra 350 square feet of living space.  Our engineer son, on the other hand, felt that the extra insulation we were adding and had added would offset the additional load.  In an abundance of caution, we roughed in for a mini-split. 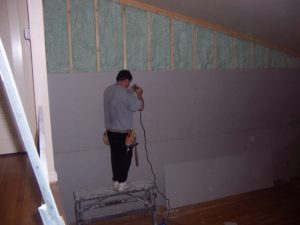 When it was all finished we now have a house that we are delighted to live in.  It is more comfortable in both the winter and summer.  The house is not drafty.  We can open and close windows to get cross ventilation greatly reducing the use of our AC.

Despite several 90-degree days this spring, we have not turned on the AC in 2017.  The contractor had determined that our gas fireplace was not safe to use and yet our family room is perfectly comfortable on the coldest days.  We installed a cork floor in the family room that added to the overall feeling of warmth in the space.  We installed four solar tubes to brighten up the house.

But the biggest surprise was that after two full years in our “new” space our combined gas and electric bills are averaging $500 per year less than before the construction despite a 15% increase in our conditioned space.  We never needed the mini-split and have yet to buy a new gas fireplace.

Energy efficiency was not the main motivation for the renovation, but it is major contributor to our satisfaction with the project.  We have a more beautiful living space, but we can enjoy it because it is also more comfortable.  And less expensive.