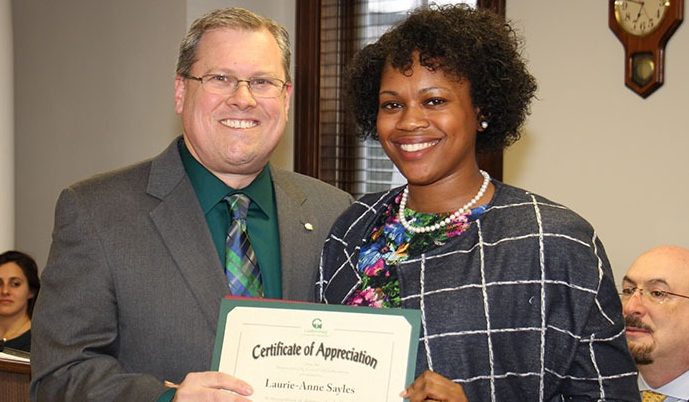 Environmental Awards were presented to individuals and organizations demonstrating outstanding environmental stewardship in the Gaithersburg community during a ceremony held Monday, April 3, 2017, at City Hall.

The Kentlands Community Foundation Go Green Group once again realized its goals of learning and exploring environmental practices and methods through a variety of activities, including clean-ups to beautify the community and protect the Muddy Branch and the Chesapeake Bay. The group organized and ran a conservation garden and an organic vegetable garden club at Rachel Carson Elementary School and its members are also part of the City’s Sustainable Maryland Certified Green Team.

The Muddy Branch Alliance brings neighbors together to build awareness, improve natural habitat and enhance the community’s enjoyment of the many streams in the Muddy Branch watershed. The Alliance has helped maintain the County Park Greenway Trail for several years, working this past year with volunteers on trail improvements and erosion control.

Seneca Creek Watershed Partners helps to protect the water quality of local tributaries and assists nearby watershed groups with stream monitoring. Through the annual efforts of the partners, residents learn about the health of local streams.

The Woodland Hills Homeowners Association continues its tree stewardship program, along with other programs to reduce erosion, promote conservation landscaping with native plantings, control invasive species, and educate its residents about the sensitivity of the wooded areas. In 2016, Woodland Hills planted more than 575 perennials, 26 shrubs and 15 trees throughout common areas, removed invasive species, and cut vines at tree bases. The community hosted its fifth Wildlife Habitat group event, handing out native plants and providing information to residents about gardening, the Great Seneca Watershed, and Woodland Hills. The community was also recognized by Montgomery County with two beautification awards in 2016.

Boy Scout Troops 1094, 489, and 926, led by Hunter Paul, Raphael Zdanis, and John Paul Adzema, worked extensively on improvements to the Muddy Branch Trail. Their efforts included re-routing portions of the trail to higher elevations, creating diversions for stormwater that shed runoff to the side of the trail, and replacing a staircase with 22 wooden steps that led down into the stream valley to a heavily accessed area that was slippery and prone to erosion.

Asbury Methodist Village is a Continuing Care Retirement Community that has served older Americans for more than 90 years. Noteworthy environmental accomplishments for 2016 include maintaining certification by the Wildlife Habitat Council as a “Corporate Wildlife at Work” site, recycling more than 152,000 pounds of carpet from renovated apartments, holding a Shred-It Day for Asbury residents, increasing the number of trash receptacles made of recyclable materials, and hosting a Housekeeping Fair to enhance resident awareness of recycling.

This past year, Homewood Suites of Gaithersburg worked with the Muddy Branch Alliance to install Wood Duck houses within the Kentlands/Lakelands area adjacent to Lake Nirvana and Lake Varuna. The houses help boost the Wood Duck population by providing housing, shelter from bad weather, and security from predators. ”Lewis Gets a New Home,” a new book in the Lewis the Duck series that incorporates the hotel’s Wood Duck logo, was recently published, and the hotel has also helped with trash pickups and maintenance work along the Muddy Branch trail.

Fitzgerald Auto Malls is receiving its eleventh annual environmental award. Since 2004, Fitzgerald’s Environmental Management System has been certified to the rigorous ISO 14001 standard, which helps organizations minimize the impacts their operations have on the environment and comply with laws and regulations. In 2016, Fitzgerald received recertification from the Montgomery County Green Business Directory and is the first and only automobile dealership to be recognized as a green business. Fitzgerald remains 100 percent wind powered.

During the past year, the Eco-Action Team at St. Rose of Lima Church has participated in the Alice Ferguson Watershed Clean-up at Longdraft Branch and maintained and expanded their native plant demonstration garden and Monarch Butterfly Waystation. In conjunction with its highly-attended annual outdoor Fiesta, the group implemented numerous recycling initiatives. The team also sponsored a Citizen’s Climate Lobby film screening of After the Surge, which was followed by an expert panel discussion.

John Stokke regularly attends Muddy Branch Alliance clean-up events and also takes the initiative to pick up litter on his own. During his clean-up efforts in 2016, John collected more than 12,000 cans and bottles, 18 shopping carts, eight bikes, three Razor scooters, 13 tires, 32 diapers, a couch, and a 30-pound motor.

Laurie-Anne Sayles has many volunteer pursuits, including writing the shared newsletter for Seneca Creek Watershed Partners, the Muddy Branch Alliance, and Watts Branch Watershed Alliance. She has added an environmental focus area to the newsletter that features interviews of local environmentalists. Laurie-Anne also recently spoke at Asbury during the “State of Maryland Waters” report with the Muddy Branch Alliance.

Louis and Lana Cerny regularly maintain a walking path along the Muddy Branch Greenway trail by picking up trash and keeping track of obstacles blocking the path. They live near the Muddy Branch stream and are active in keeping their local environment a place of peace and beauty for all to enjoy.

John and Toni Hudson have been very active with the City’s Environmental Affairs Committee for many years and are vocal supporters of the City’s natural environment and advocates for sustainable, green living. John and Toni were the first homeowners in their vicinity to install solar panels on their roof, inspiring multiple homeowners to follow their lead. They are always willing to provide advice about native landscaping, rain barrels, composting, and other natural practices. John and Toni have also worked with the Izaak Walton League’s “Lands Green, Waters Clean” program to plant bee and butterfly friendly native plants and utilize rainscape techniques. The Hudsons also advocate for legislation to make the world a cleaner and healthier place.