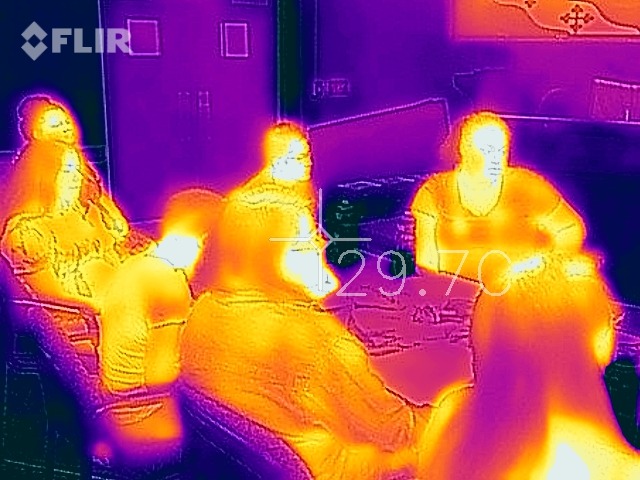 This year, the Residential Energy Program Manager, Larissa Johnson, became part of the NOAA Climate Stewards Community. As part of the community, she had to develop a climate stewardship action project with students from Montgomery County.

This summer she partnered with the City of Rockville to complete an action program titled “Source to Socket: Learning the FUNdamentals of Energy Literacy.” Students from the City of Rockville Community Services Youth Programs participated in a four day training session which connected them to their energy sources and encouraged them to make energy conscious choices.

One of the students, Jasmine Jackson, a rising Senior at Richard Montgomery High School documented the entire experience for us in a series of blog posts. Each day, the students focused on a different area in which energy impacts their lives. This is Jasmine’s second blog post in a series of three. 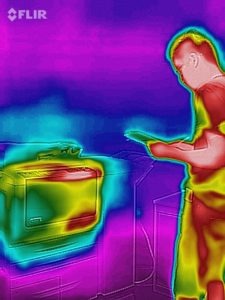 Hey everyone, this blog post is about the second day of the project. The goal today was to learn about the role of city government in energy choices, and to understand the components of the Rockville City Climate Action Plan and their role in helping the City educate the public about it. We were also going to experiment with and understand how “tools of the trade” work, such as the IR thermometers (infrared thermometers), thermal cameras, and light meters. The final goal of the day was to perform an energy audit on Rockville City Hall, to gather information that will help shape the next steps for the City.

It was another normal day getting up and joining with the rest of students. Every day we did something new, which always made the day interesting.

Today everyone was eating and chatting over of what we were going to do today after making our solar ovens yesterday. Ms. Johnson mentioned that today we were discussing how we can reduce energy within our homes and within Rockville.

Before starting the activity, we all went outside and played a new game, it was called Ro Sham Bo Rockstar. It was exactly like the rock paper scissors game but if you lost you must follow the person you lost to and cheer them on so they can beat the other person. It was a cool game.

After that we headed back toward the Rockville City Hall, the Mayor and City Council room where we met two new guests, Ms. Erica Shingara and Ms. Dianne Neville.

At City Hall, we learned about the energy we use at home and in public buildings. For example, did you know that your thermostat should be set at 78 degree during the summer, using cold water to wash your clothes can help reduce the amount of money you’re spending and that your shower should only take five minutes??? That was kind of shocking for me because everyone knows that I love taking showers for more than five minutes. 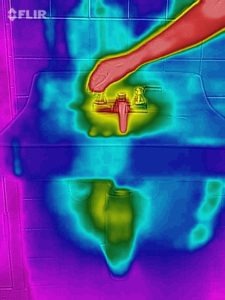 We went through a Power Point presentation with Ms. Erica that showed us how much energy Rockville currently uses, and then we watched a few videos that highlighted some of the energy “tools of the trade” like the IR thermometers, thermal cameras, and light meters.

Ms. Erica and Ms. Dianne taught everyone so much about how much energy everything around us use daily, such as building, phones, and lights. To learn more about energy use, everyone split into different groups and we were given a bag and some materials to take picture of our process. We used many different tools like the kill-a-watt meter, light meter, thermometer, and thermal camera.

I also learned about keeping track of lighting, heat, and temperature around each floor of City Hall and how important that is to reducing the amount of money the City pays for electricity. It is also important for the City of Rockville to improve their structures to use less energy. A lot of appliances/lights take up energy in the building and there are many ways to change and conserve energy. Even little things like chargers can take up a lot of energy. Lots of things that seem insignificant can make a huge difference.

We each took turns using each tool within the different group and kept track of the amount of energy that was most used around the office. It was probably the phone, the window, and the computer that was the hottest.  After these activities we all came back together and talked about what we observed and learned throughout the day.

Hey everyone, Jasmine again. I am writing this blog about my third day project with the county to work towards being consciously aware of our energy usage and impact on our world. Our goal for today was to understand that energy decisions are influenced by economic, political, and environmental, and social factors. We also learned about the basics of community based social marketing and how that plays a role in the outreach that cities, counties, and state agencies do. By the end of the week, we were asked to come up with a plan on how to do outreach to a specific audience in Rockville. 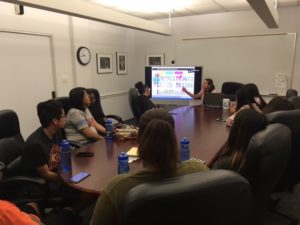 Another day joining with the rest of the young volunteers.  Everyone was eating and chatting about what we learned yesterday when Ms. Johnson came back and told us we were doing another game outside.

We all went outside and play a new game called Ro Sham Bo Evolution,  another version of Rock Paper Scissors. In this game, we started as an egg and once we won, we became a chicken and then when we beat another chicken, we became a Rockstar and then a superhero. It was a quick game, I wish it could’ve last longer but it was still fun!

After the game, we walked back to the Department of Environmental Protection to learn more about communicating with the public.

Before we went over the findings from the energy audit, Ms. Johnson talked to us about  what Marylanders think about energy and how the County communicates with the public through My Green Montgomery stories.

Then we started discussed what we saw while doing the energy audits with Ms. Erica and Ms. Dianne. I volunteered to write on the white board and we made a list of the things we noticed during the energy audits. We were trying to determine what the common themes were. For instance, a lot of people left lights on when they weren’t in their offices. Some people left their chargers plugged in even when they weren’t charging anything and a lot of people have personal coffee makers on their desks but don’t use them that much.

We watched a video some videos about Behavior Change  and Community Based Social Marketing (CBSM) and then we used the principals of CBSM to determine what audiences, messages, barriers, and benefits would help us with an outreach campaign for the City, the County, and especially for teens.

One of our suggestions was for us to become the “energy police” where we would go around to different offices and issue citations and warning for people who are using too much energy. That was one of the best ideas. We wrote down our main ideas that could work to convince others to save energy. Then we split into three different groups to focus on different tactics, one group worked to create a meme, one worked on creating a competition for City employees, and one worked on finding a quote or a saying to remind a person to turn off everything when they leave a room. 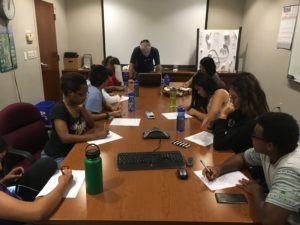 After we presented our ideas to each other, a new guest, Reuven Walder from ecobeco and a member of the Montgomery County Energy and Air Quality Advisory Committee came to talk to us about things we can do in our homes. He told us about what he does for a living, that he helps people reduce their energy usage. He also talked about the components of the Quick Home Energy Checkup, something that he encouraged us all to get.

Click here to read Jasmine’s third and final blog post in this series about “Source to Socket: Learning the FUNdamentals of Energy Literacy.”