According to the environmental education non-profit organization’s founder, Joseph F. Richardson, Jr., the reach to children began with a summer program in 1985 with only 147 kids.

In the years since, it’s grown to provide seven different summer camps for 1400 young people and 38 before- and after-school programs for 2500 participants. Thirty-four of the school programs are housed in Montgomery County, with virtually one in every school. Some of the programs are also located outside of the county’s schools, with other day- and after-care providers. Programs begin at 6:30am and last until the school bell rings. They pick up again after school is done for the day and run until 6:30pm. 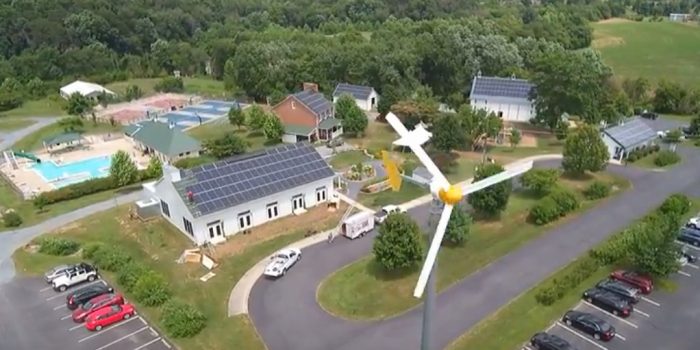 The campus launched in 2006 and is located on a bucolic 115-acre site just off of I-270 in Urbana. As you’d expect from any program that is all about the environment, the campus composts its own waste and produces more energy than they use. As a result, it has become a top destination for school group trips but also private groups, corporations and others interested in learning more about carbon footprint reduction.

“It’s solar-powered with geothermal construction, radiant heat with lithium ion battery backup, so it’s one of the most energy-efficient and sophisticated places anywhere,” Richardson says.

The summer camp programs is very focused on composting and teaching sustainability as much as possible – and getting outside and connecting to nature.

“The kids are in the creek and they’re getting muddy.” Richardson says.

The organization’s other focal points, he adds, is on sustainable farming, rotational grazing and a number of other sustainable agricultural practices.

“We want to produce our energy, grow our own food, protect the ecology, have sustainable waste and energy neutral buildings and just be a demonstration site for doing things differently,” Richardson says. “It’s a very holistic approach.”

That approach includes teaching energy efficiency and conservation to students who visit the Bar-T site as well as to area students in their own schools.

One of Bar-T’s programs is called Watt’s Up – a series of elementary school lessons design align with their curriculum. It encourages youngsters to learn about wind, hydro and solar power as well as soil. They not only go into the schools but they also have the students come to the Mountainside Ranch to see the difference between plants grown at home and in a greenhouse and look for macro-invertebrates like flies to see examples of what a healthy eco system looks like as they catalogue what they find.

“We are a non-formal education partner. Nobody has as many different environmental practices on-site as we do,” Richardson says. “And it’s a great lesson. When kids come away, then they can go to any stream in the future, turn over some rocks and know that if they find macro-invertebrates, they have a healthy eco-system. If they’re not finding anything, they know that it means that their tributary is probably polluted.”

About 28 to 33 percent of everything that goes into landfills is organic and could be composted, Richardson says. Recognizing the difficulties in getting high schoolers to change established patterns of behavior of stuffing everything into a paper bag and tossing it into the trash, Richardson says they began looking to launch composting programs in area elementary schools.

Last January, they began a program at Sugar Loaf Elementary School in Frederick County where they measured and weighed trash every day. They found that out of every 220lbs. of waste, all but 22lbs on average was not being recycled, but it was too badly contaminated to be composted. 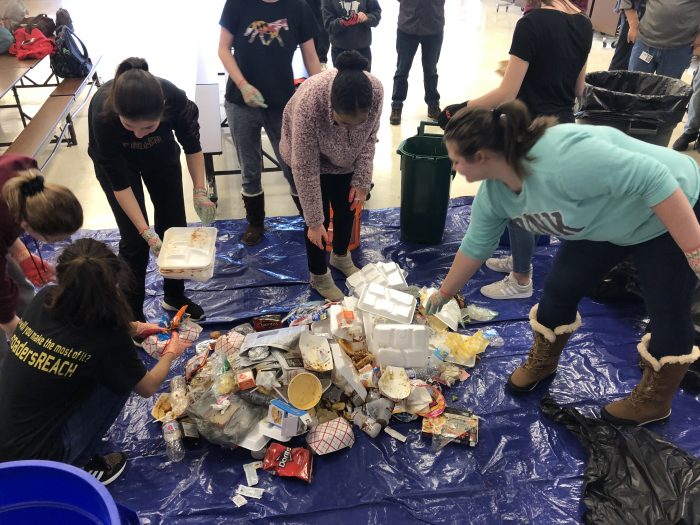 The solution was a four-bin waste system – one bin each for recyclables (paper and plastic), trash, liquid and organic foodstuff – to help the students separate trash from compost and recyclables. Eventually, 85 percent of waste was diverted, and the school went from 200lbs. of waste a day to 25-30lbs. – about 55 percent of which was food and another 24 percent liquid.

“They were successful in keeping 25 to 35 percent of the school’s organic trash out of the waste bins. That was remarkable,” Richardson adds.

Waste sorting was done at eight other schools and the results were similar. In fact, the data was so compelling that $10K was allocated by the school district to start initiating additional composting programs. Another $20K was donated and, as a result, composting programs will be launched in another 14 area schools during 2019-2020 school year. Although some will be in Frederick County, about half will be in Montgomery County.

The goal is simple: To prove that composting is a cost neutral environmental remedy.

“If you reduce waste by 85 percent – by taking all of the yucky stuff out of the trash – you will need fewer dumpsters pulls and those fewer dumpster pulls can pay for the organics removal,” Richardson says.

Although Richardson says Montgomery County does great recycling and trash reduction programs in some of the schools, it is completely voluntary and at the discretion of each school’s principal.

The goal is to have four-bin systems in all schools within five to seven years.

Although many of us want to be good environmental citizens, the reality is that many people don’t do the best job recycling. Contaminating organic waste indicates signals that we aren’t quite ready to broadly compost our waste, but we can begin to integrate the idea into our every day practices, Richardson suggests. Ultimately, the goal is to get the organics out of the waste bins.

And while bin programs exist across the country, the data collection on its effectiveness hasn’t really happened yet. Bar-T is working to fill that void.