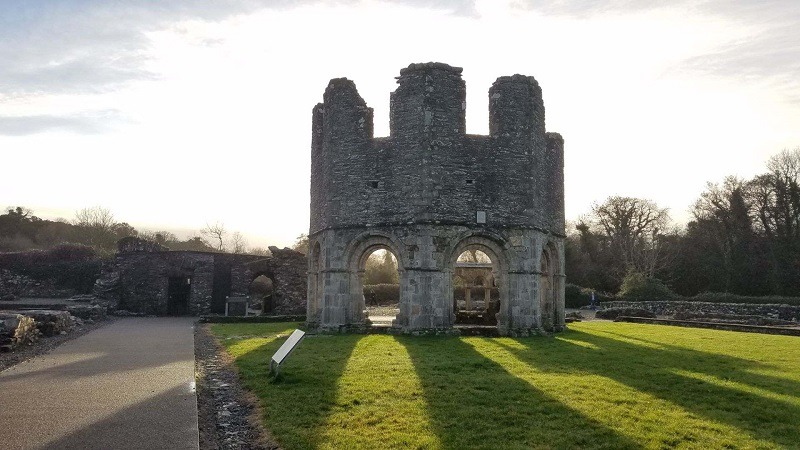 In January, DEP’s Sustainable Landscapes Manager traveled to Ireland, and it got us thinking about lawns. Courtyards in 900 year old monastic ruins and fields by 5,000 year old megalithic cemeteries were bright green, yet untouched by fertilizer bottles.

In January in Ireland, the mowers were running and a smell of fresh grass would permeate the towns. Hillsides were green and sheep were actively grazing. But here in Maryland, the average temperatures in January are between 30°F and 42°F, and our grass is dormant. Forecasts call for snow and freezing temperatures.

Ireland is on the same latitude as Hudson Bay, Canada

The fescues we grow for lawns in Maryland are typically the same species that grow well in Ireland, and are greenest when the weather is similar to Ireland. For our region, we should expect grass to be at its happiest in spring and fall, when temperatures are between 40°F and 70°F, but certainly never in summer when temperatures stay well above 70°F. Despite two and a half more hours of sunlight in Maryland than in Ireland, our fescue grasses go dormant in the deep cold of winter and again in the high heat of summer.

Of course, climate is just one factor is the lushness of Ireland’s grass. Many areas are freely traversed by sheep, who when they graze also leave behind their droppings, which are really just partly digested grass. Cut grass is an excellent fertilizer, but run through the gut of an animal means it’s already partly broken down for quick update by soil microorganisms. And where the sheep graze, they also aerate the soil, which is great for microorganisms and soil moisture.

Fescue grasses are happiest when the weather is cool, so let them go dormant and brown to rest in the heat of summer to grow deep roots. Be sure your soil is aerated, which helps it retain moisture and improve habitat for microorganisms. And keep your lawn off a chemical diet, so it can do it what does best in a healthy soil–grow green.