Sustainability in Practice at Glenstone 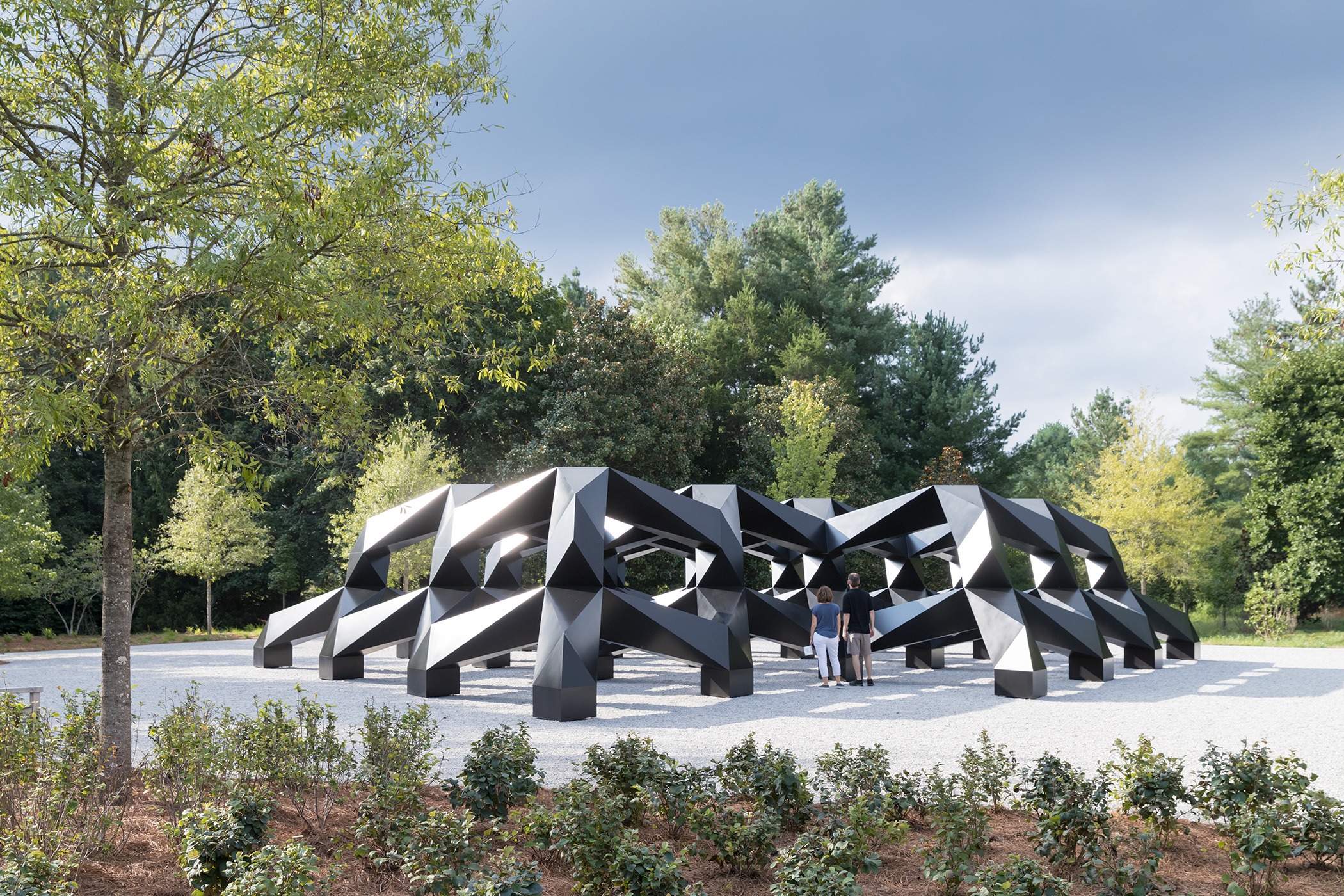 As any visitor will attest, Glenstone is a veritable paradise with grand vistas, serene walking paths, and stunning art. This magnificent place is the result of the conviction of its founders, Mitchell and Emily Wei Rales, who deeply believe in the restorative value of, and the connection between, art and nature.  That belief manifests in how they operate and manage their institution.

Paul Tukey, Glenstone’s Chief Sustainability Officer, credits the actions outlined in the Montgomery County Green Business Certification with shaping a lot of Glenstone’s sustainability efforts. He works with the 140-person staff and all departments to not only green their day-to-day operations but also to inspire visitors by accentuating nature’s aesthetic so that they take steps to protect it. There are four main areas where they concentrate their efforts, waste reduction and recycling, organic landscaping and stream restoration, promoting the nexus between human health and ecosystem health, and public transportation. 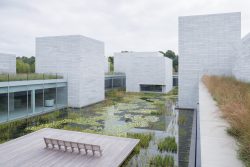 One of the foundational priorities for Glenstone is waste reduction to help meet the County’s 70% diversion rate by 2020.  After setting, and then exceeding, that goal back in 2013, the museum now regularly achieves an 80% reduction rate.  Not only is Glenstone recycling mixed paper and “co-mingled” items such as cans and plastics, which is required by law, but its associates also separate a far more extensive set of items including shopping bags, food waste, electronics, batteries, construction debris and more – in fact, a total of 12 different streams of recyclables are sorted and monitored weekly.  The scope of this effort is reinforced through frequent meeting reminders so that everyone is on the same page. 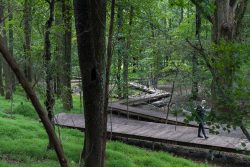 A key priority for Glenstone is ensuring that the expansive grounds are managed using principles of organic landscaping.  Its own organic fertilizer in the form of “compost tea” – generated from its in-house composting program — is sprayed on the vast lawn as a soil amendment.  And, working in partnership with Montgomery County’s Department of Environmental Protection, Glenstone has restored two major streams flowing through the property.  Previously eroded and consumed by weeds and invasive species, these streams have now been revived, enhancing water quality for aquatic wildlife.  As part of the stream restoration and recent overall expansion effort, more than 8,000 biologically diverse native trees were planted to minimize erosion and sequester carbon, thereby addressing climate change.

Promoting the Nexus between Human Health and Ecosystem Health

The Café, run by chef Brian Patterson, formerly of L’Académie de Cuisine, procures food from local farmers who are not only producing organic produce, but also adheres to other sustainable practices such as land stewardship or minimized carbon impact. “Before the food even comes through the door, it’s a product of best practices,” says Brian.

Glenstone also evaluates all of its cleaning products to ensure that they meet robust human health standards while being earth-friendly, biodegradable and chlorine-free.  And, to make the connection between sustainability and wellness explicit, it organizes an annual 10,000 steps-a-day challenge to encourage staff to exercise and get out in the natural landscape they’ve worked so hard to enhance.

As a destination museum on a rural road under the jurisdiction of the Rustic Roads Program of Montgomery County, Glenstone carefully monitors automobile traffic to and from its site. To that end, Glenstone began working with the County’s Department of Transportation in 2014 to discuss the potential of a new bus line that would bring service not only to Glenstone but also to nearby Tobytown, a historic residential community near the Potomac River. A pilot program opened for Glenstone staff and Tobytown residents in 2016, and the County permanently added Glenstone to the 301 Ride On bus route when the expansion opened in 2018. To promote bus ridership, Glenstone is testing a pilot program through the end of April that guarantees museum entry for Ride On passengers without advance reservations on Thursdays through Sundays. 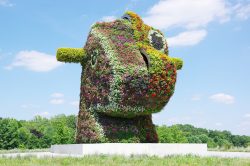 In addition to the art galleries, all of which are designed to lofty green building standards and are some of the most energy efficient museum buildings in the world, Glenstone puts an exclamation point on its commitment to sustainability inside its freestanding Environmental Center. This multi-use maintenance and education facility, opening later this year, will give visitors an opportunity to learn about techniques practiced by the museum, and reflect on the connections between nature’s beauty and proactive stewardship.  Such an experience is designed to inspire and create resonance with visitors so that they replicate practices at home and in the office.

Glenstone also welcomes middle and high school field trips (visitors must be 12 or older to enter) and partners with the Montgomery County Public Schools to cover their bus and substitute teacher expenses.

Perhaps the best combination of art and nature is Split-Rocker, designed in 2000 by artist Jeff Koons, and installed at Glenstone in 2013. Towering 37 feet above a rolling meadow of native plants, it is a light-hearted cubist rendition that is half dinosaur head and half pony head of a child’s rocker. Roughly 70 cultivars of organic flowers, covering 2,500 square feet, provide texture and seasonal color. The soil is organic, sourced in Pennsylvania and designed to drain well while also retaining moisture. The flowers, which are constantly nurtured and monitored, are planted each spring. An irrigation system, maintained from internal scaffolding, uses reclaimed site water from a cistern directly below the sculpture.  Much of this work falls to Chris Ryan, a University of Maryland graduate with a master’s in plant science, whose full-time responsibility is to maintain the sculpture.  He jokes that not many people have a job like his.

Ultimately, Glenstone is a living laboratory and beacon of possibility and leadership in the region.  Paul Tukey says that sustainability is not enough. “If we sustain the path that we’re on, we’re all going to drive off the cliff together. What we really need to be shooting for is regeneration. We need to leave the planet better than we found it. In Glenstone’s case, that will be true.”  Victory, for him, is when someone arrives excited by art and leaves excited by nature.

For more information on Glenstone’s environmental initiatives, see the Landscaping page on their website, www.glenstone.org.