What flows down the street, goes to the creek! 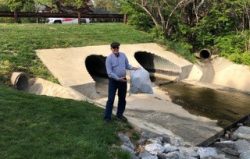 Bill Wydro during a litter patrol

…And we have proof!

Bill Wydro, a board members of the Regency Estates Citizens Association conducts periodic litter patrols of his neighborhood. One area routinely checked is Snakeden Creek, next to the entrance of the Regency Estates community swimming pool. There are 2 approximately 7’ diameter culverts that go under Gainsbourgh Road and open into the creek at that point. These large culverts are fed from other pipes throughout the neighborhood, conveying whatever flows into the storm drains from the streets.

Litter found during one of Bill’s patrols

On one of these patrols in early May, besides the usual assortment of items, an iPhone 8 in a protective case was found deposited on the rocks of the creek bank. The board member on this patrol took the phone home, charged it (amazingly it still worked!), and although it was locked, the home screen was a picture of 2 teenage girls. The picture was posted on the lost and found section in Nextdoor.

Within 24 hours, someone had identified one of the girls and provided contact information for the father! The father and daughter were able to retrieve the iPhone.

In early March, the phone’s owner was walking on Tifton Drive in Regency Estates, during a heavy rainstorm, she dropped the phone and to her dismay it disappeared down a storm drain. ☹ Almost 2 months later that the phone appeared on the banks of Snakeden!!  Thanks to Bill and with some luck, the teen and phone were happily re-united. 😊

DEP GIS staff were able to take this story and trace the likely path through our storm drain system that this phone traveled over its two months journey!

The phone’s journey, goes to show how important it is for us to reduce litter and put trash in its proper place. 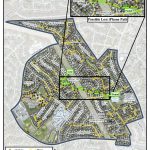 Rainstorms in our area ensure that anything left in the environment WILL eventually be washed into a creek, and you know where that leads… The Anacostia and/or Potomac Rivers and then the Chesapeake Bay!

This phone’s journey is a great reminder to us all about how storm drains work and therefore why pollution prevention in our County is so important to us and our entire Bay region.

Don’t forget- anything left on the ground has the potential to enter a storm drain and end up in our rivers and streams! 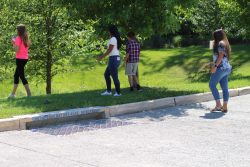 Reminder that storm drains are part of the Chesapeake Bay drainage area!

Thanks for sharing with us Bill!