Working together to protect our streams 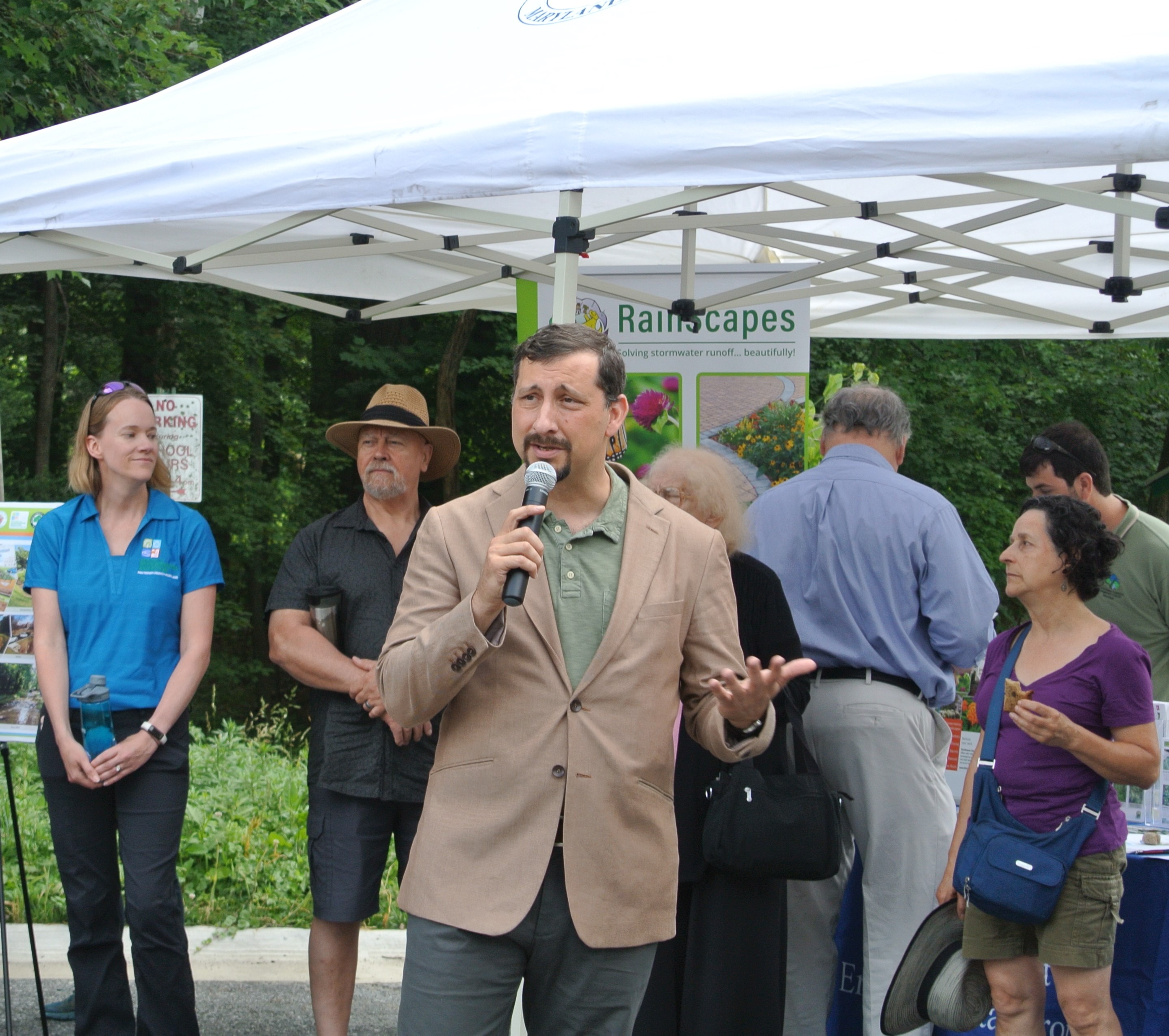 In 2009, Montgomery County Department of Environmental Protection (DEP) embarked on a multifaceted effort to reverse decades of neglect and improve water quality and habitat conditions in a small tributary to Sligo Creek called the Breewood tributary.

Located east of Wheaton at the intersection of University Boulevard and Arcola Avenue, the Breewood watershed encompasses 64 acres of high-density suburban development that drains into the Breewood tributary.

Take a walk along the Breewood tributary today and what you will see is not at all how the stream looked just a short time ago. 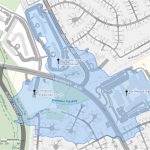 Breewood Watershed is within the blue shaded area

In 1951, the Breewood watershed consisted only of farm fields and forests.  The following twenty years brought big changes to the watershed.  By 1970 the houses, high rises, schools and roads that currently exist were built.  Development in the county during this time did not include stormwater management.  Impervious surfaces (i.e. roads, parking lots, rooftops, etc.) in the watershed went from almost zero in 1951 to 26 acres, or 42% of the watershed area, by 1970.  Aerial images below of Breewood watershed highlighted in yellow. 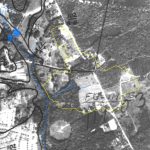 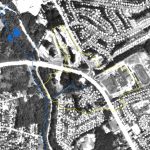 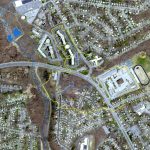 Unmanaged stormwater runoff from these impervious surfaces flowed directly into the Breewood tributary causing an increase in the frequency of flooding and erosion of the stream channel.  After four decades, the stream was severely eroded with vertical stream banks as high as 13 feet.  It’s estimated that 2,667 cubic yards or 267 dump truck loads of dirt eroded from the stream channel during this 40-year period.  On average, that’s one dump truck load of dirt dumped into Sligo Creek every two months. 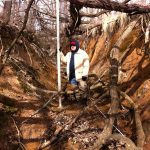 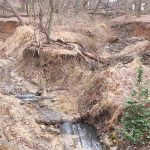 A Little Help from Friends

The five projects are:

Construction of all thirteen facilities was completed in July 2018. 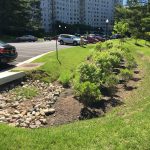 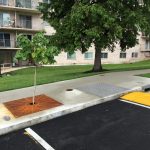 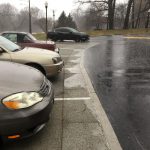 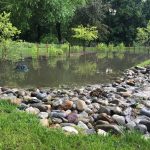 Bioretention Facility at Northwood Presbyterian Church Immediately After a 1.1 Inch Rainfall – May 23, 2019 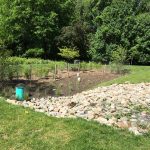 Empty Bioretention Facility at Northwood Presbyterian Church One Day After 1.1 Inch Rainfall – May 24, 2019

Formerly a breeding ground for illegal dumping and litter, the western end of Breewood road was cleaned up and a natural surface trail was created with the help of Northwood High school students, Montgomery County Parks, the Neighbors of Northwest branch, Friends of Sligo Creek and community members. The area now boasts the Northwood Chesapeake Bay Trail and an attractive bioretention providing stormwater treatment of 7.1 acres, 2.1 acres of which are impervious surfaces. Construction of this project was completed in May 2017. 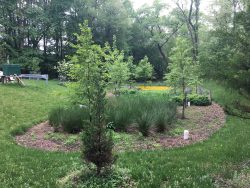 Ten bioretention and raingarden facilities were designed and installed within the public right-of-way along Breewood Road, Fiesta Road, Tenbrook Road and Tenbrook Court.  Combined, these ten green streets practices provide stormwater treatment for 1.8 acres of impervious surface.  Construction of the Breewood Manor Green Streets was completed in May 2015. 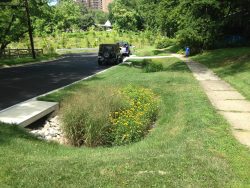 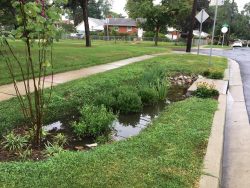 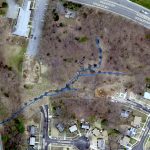 The Breewood stream restoration project followed a design approach referred to as Regenerative Storm Conveyance (RSC).  The idea behind this approach is to promote the seepage of stormwater into and through a porous substrate comprised of soil, sand and wood chips.  Through this process, pollutants are able to be filtered out.  A series of pools and riffles were also created to improve aquatic habitat. 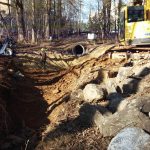 Filling in the Breewood Stream Channel with a Mixture of Sand, Soil and Wood Chips – December 2014 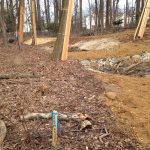 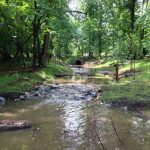 During and after storm events, water flows through the pools and riffles without eroding the stream channel.  The stream banks were seeded with a mix of grasses and perennials to provide stabilization.  Additionally, 315 trees and shrubs were planted throughout the 1,200 feet long project to further stabilize stream banks and provide wildlife habitat.  Construction of the Breewood Tributary was completed in May 2015. 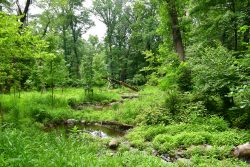 A Reason to Celebrate!

On June 8th, 2019, nearly 10 years since the effort first began, a group if residents joined dignitaries from Montgomery County government, Metropolitan Washington Council of Governments, Friends of Sligo Creek and Northwood Presbyterian Church to celebrate the completion of this significant environmental project that provides cleaner water for current and future residents of Montgomery County to enjoy.  In addition to being inspired by the speakers, those in attendance were provided with the opportunity to do a walking tour of the Breewood watershed to see and learn how the new stormwater management facilities work to manage and clean stormwater runoff.

“The bioretention garden constructed at the church as part of the Breewood project has not only contributed to the beauty of our church property but has also made our congregation excited to become more actively involved in the improvement of God’s creation close to and within our worship home.”

Check out this video clip of the celebration. 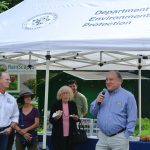 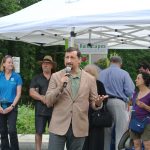 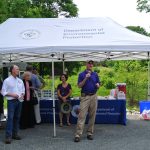 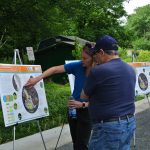 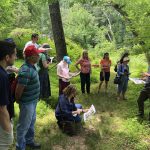 At approximately 1.3 miles in length, the Breewood watershed self-guided walking tour offers a great way to see all the project areas. The guide and map of the walking tour is available at: Breewod Watershed Tour Map and Guide

We hope everyone has an opportunity to visit and see what a great asset this effort is to the community and in further protecting our natural resources!

4 comments on "Working together to protect our streams"