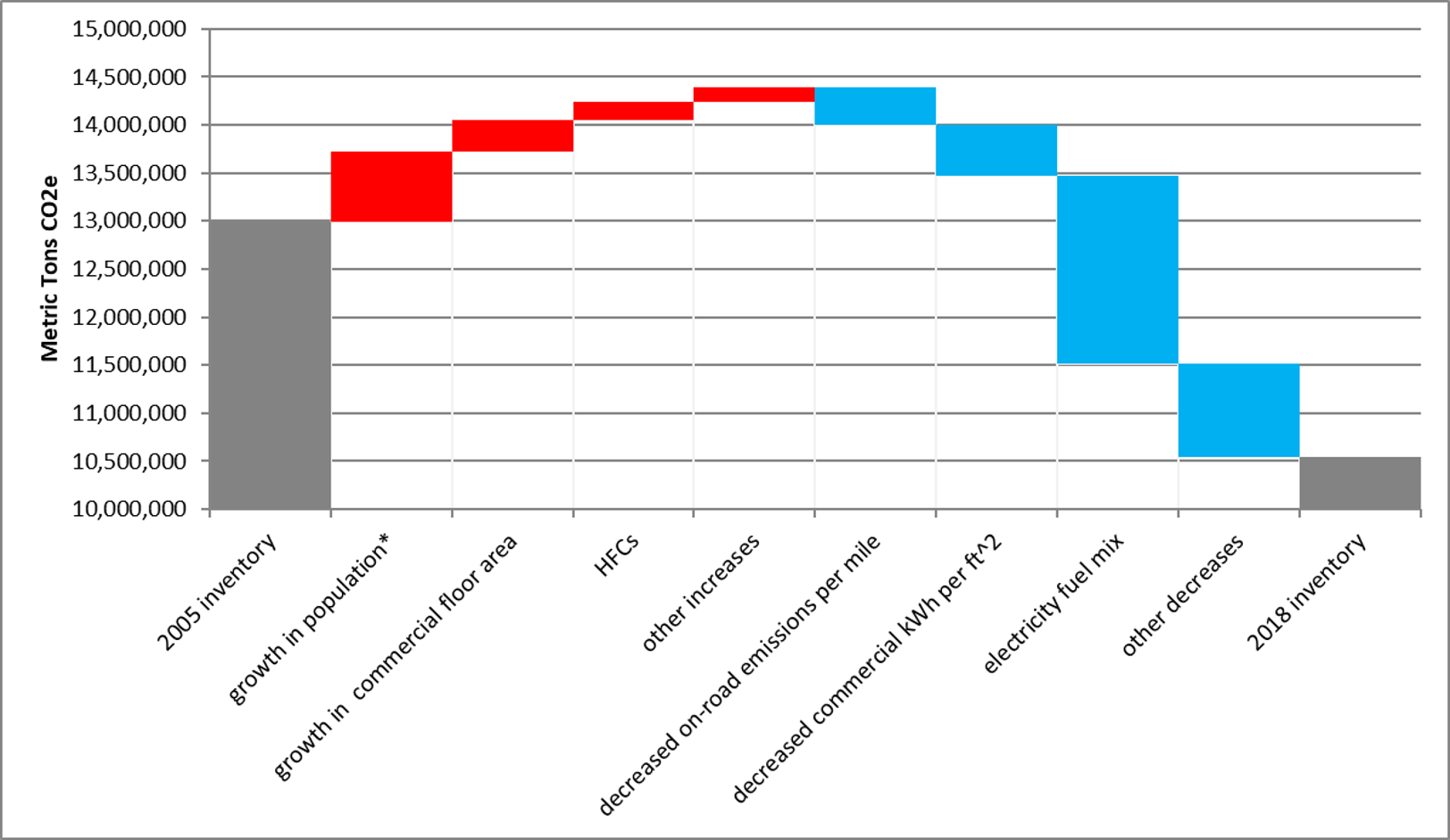 By Julia Brown and Tenzin Yangkey

A critical focus of Montgomery County is addressing the causes and impacts of climate change in order to ensure a healthy and equitable future for all of its residents. In 2017, the Montgomery County Council adopted the Emergency Climate Mobilization Resolution, which called for an 80% reduction in County greenhouse gas (GHG) emissions by 2027 and 100% elimination of GHG emissions by 2035.

In order to better understand the breakdown of the County’s emissions, Montgomery County recently put together an analysis on the County’s greenhouse gas inventory to assess the main contributors to the change in emissions since 2005 which can be found on the County’s climate webpage. As of 2018, the building sector is the greatest driver of reductions where emissions are down by 3% since 2015 and down by 30% since 2005. GHG reductions in the building sector account for over 90% of all emissions reductions since 2005. Within the building sector, the largest contributor to this reduction is decreases in electricity emissions, both residential and commercial, in large part due to cleaner energy sources being connected to the electricity grid and efficiency improvements. These improvements offset areas that are contributing to increases in emissions, like the use of natural gas and growing population. 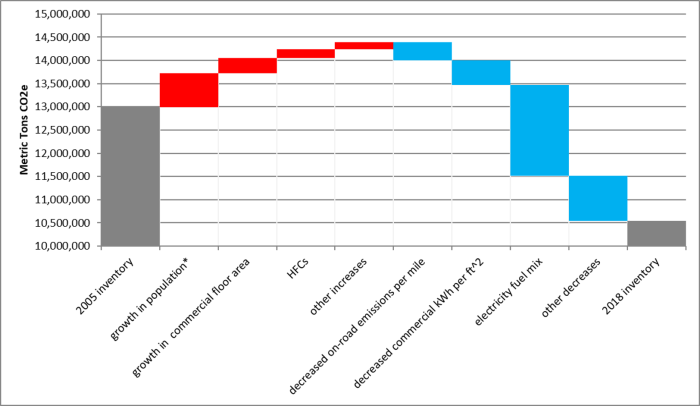 Local and state-wide policies and programs have both driven decreases in greenhouse gas emissions. Changes in the electricity fuel mix account for a decrease of 2 million metric tons of carbon dioxide emissions in  Montgomery County between 2005 and 2018, and are the biggest driver of GHG reductions since 2005, as seen in the graphic (represented as “electricity fuel mix”).

A critical driver of the change in fuel mix is Maryland’s Renewable Portfolio Standard (RPS). An RPS is a mandate whose purpose is to increase the production of energy from renewable sources, like wind, solar, biomass, and other alternative sources. Maryland’s RPS was established in 2004 and was most recently amended in 2019 to mandate that electricity utilities and providers must produce 50% of their electricity from renewable sources by 2030. This policy has led to significant increases in renewable energy investment and capacity since its establishment in 2004, leading to a 150% increase in renewable energy electricity generation from 2008 to 2018 in Maryland. This increase in renewable capacity has offset the former capacity of retired coal plants and these changes have directly contributed to the drop in electricity-associated emissions in the county and across the state.

Another important contributor to decreases in emissions in the County is improved energy efficiency in commercial buildings. Energy efficiency upgrades and improvements can be some of the easiest and most cost-effective strategies to lower energy and electricity consumption, and consequently reduce GHG emissions. These upgrades have contributed to a drop of 500,000 metric tons of carbon dioxide emissions in the County since 2005 as shown in the graphic above (represented as “decreased commercial kWh per ft2”).

Montgomery County’s Building Energy Benchmarking Law requires nonresidential buildings 50,000 square feet and larger to report their annual energy use and compare this to past performances as well as to other buildings nationwide. By requiring this reporting building owners become more aware of their energy use and their ability to curtail some of this consumption. Montgomery County properties that have benchmarked consistently reduced energy use by 2.5% between 2019 and 2017.

Funding energy efficiency upgrades and improvements can be a challenge. Therefore, Montgomery County introduced C-PACE on March 31, 2015 to address these challenges through a creative financing model. C-PACE is a government policy that authorizes jurisdictions to allow private capital providers to give upfront financing to commercial property owners for qualifying improvement projects, and collect the repayment through annual or semi-annual surcharges on the property’s tax bill. Through C-PACE, major updates needed by commercial buildings are funded along with the creation of green jobs, lower utility bills, and contribution to climate goals. So far, 13 properties have been renovated through the program.

Montgomery County Green Bank is another organization that works to accelerate affordable energy efficiency and clean energy investment in Montgomery County, Maryland. Commercial Loan for Energy Efficiency and Renewables (CLEER), a new lending program from Green Bank, was launched in March 2018 to support commercial and industrial businesses that are planning to make clean energy or energy efficiency upgrades to their properties in Montgomery County. The most recent example is Glen Manor Condominiums in Silver Spring, MD. They used CLEER program to finance $512,000 in operational and energy efficiency projects to reduce the property’s energy consumption equivalent to 280 tons of carbon dioxide annually over the next 10 years. Sandy Spring Bank was the partner for this renovation and so far, it funded $2 million in commercial and affordable housing projects through the CLEER program, in collaboration with the Green Bank. This investment led to the reduction of 560 tons of GHG emission each year which roughly equates to the total electricity consumption by 95 homes in the county.

Although there have been great strides in improving emissions trends in the County, there are still areas that have led to increases in emissions in 2018 as compared to 2005. One area that has seen an increase in emissions is the use of natural gas.The GHG inventory has shown that there has been a 7% increase in total natural gas emissions since 2015 and a 12% increase since 2005. Natural gas prices have been experiencing multi-year lows thanks to higher average temperatures, leading to an excess supply of natural gas and thus lower prices. Because of the cheaper price, more people have been turning to natural gas for their heating, appliances, and other needs, causing an increase in associated emissions.

Population growth is another expected contributor to the increase in GHG emission of Montgomery County. Between 2005 and 2018, there was an increase of 13% in population and 8% in the number of households which are 122,087 and 26,189 respectively. Commercial square footage, which measures the growing commercial building area in the county, also rose by 11%. These increases in household and commercial spaces means increased use of natural gas which further compounds the GHG emission from this category. Montgomery County will continue to face the challenge of offsetting growth as GHG targets are pursued in the coming years. Therefore, continuous improvement of building’s energy efficiency and complete transition to renewable energy sources in the future is key.

Although there are areas contributing to emissions where improvements need to be made, like natural gas emissions, Montgomery County and the state of Maryland have put in place programs and policies that have led to overall significant progress in emissions trends of the County. In order for the County to meet its emissions goal for a cleaner and safer future, this commitment to renewable energy, energy efficiency and so much more must continue.