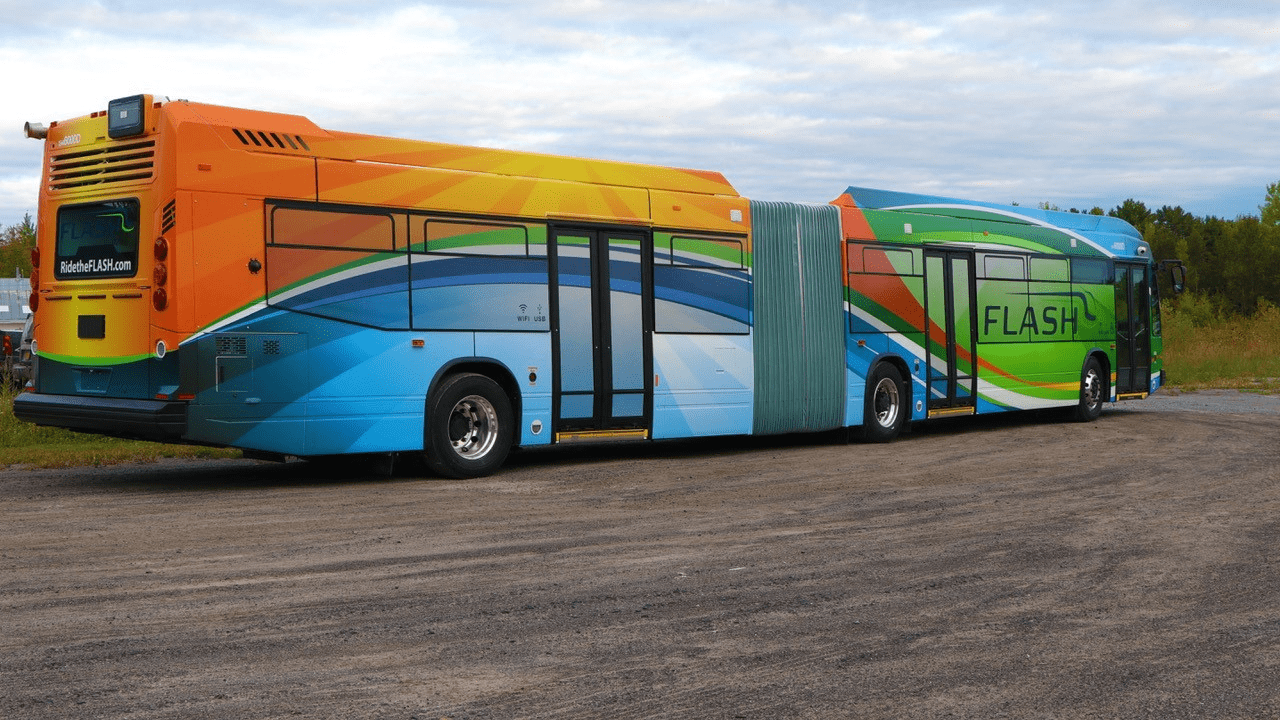 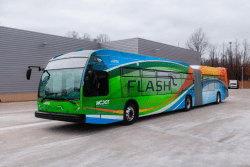 Construction of Montgomery County’s first “FLASH” bus line along US 29, which began in 2018, is expected to be completed by mid-August and open early fall 2020.

County Executive Marc Elrich has been an advocate for bus rapid transit (BRT) since his early days as a Montgomery County Councilmember. He first proposed a BRT system in 2008, and the Countywide Transit Corridors Functional master plan was fully adopted in 2013. The US29 project is funded in part by a $10 million grant from the Federal Transit Administration.

Ride On Bus/Flash/Ride On Flex is free of charge at least through the month of September, 2021.  Here is some additional information from Ride On’s website:

They only honor these additional passes:

Visit here, for more information about Ride On and Flash fares. 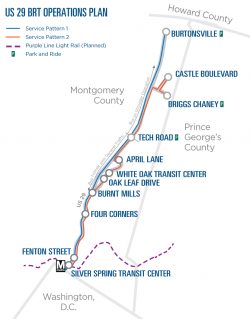 The FLASH line on US 29 is designed to promote efficiency and increase mobility, reducing commute times by as much as 30% for riders. The fare will be two dollars, the same as for Ride-On buses, and all Ride-On discount fares will be honored. Riders will pay at the station prior to boarding in order to reduce boarding time. Buses will have three doors to enable fast on and off-boarding. Additionally, stations will have raised curbs and level boarding for better accessibility. The buses are scheduled to arrive frequently and consistently—roughly every eight minutes during peak commute hours–operating throughout the entire day and on weekends.

A key component of this system is green light signaling, in which buses are prioritized at traffic lights. While most BRT systems use dedicated lanes in which only buses can travel, FLASH buses will use existing lanes for now, including a portion of the corridor that will operate in Bus-On-Shoulder with buses able to pass vehicles in standard travel lanes. The Montgomery County Department of Transportation (MCDOT) is currently conducting a study of dedicated lane repurposing, examining the possibility of dedicating certain center lanes to buses during peak hours.

FLASH buses are bigger than traditional buses. The current fleet will run on clean diesel, but the County is considering using electric buses in the future.

As part of the FLASH project, the County has also made improvements to pedestrian infrastructure, including restriping crosswalks and installing new traffic and crossing lights at intersections that did not previously have them. These improvements are meant to increase pedestrian safety, as most bus riders walk to the stations. Some stops have also been outfitted with a Capital Bikeshare station.

The COVID-19 pandemic has led to some delays in construction as station components and other technological parts needed for construction were not available for some time. At this point, the County has all of the necessary vehicles and will soon complete construction. When the service does open, social distancing, wearing face coverings, and other precautions may be recommended.

In the future, MCDOT is looking to construct more FLASH routes as they work towards implementation of the overall system. Howard County has also been exploring its own BRT system which, in combination with Montgomery County’s system, would offer an even larger network of transportation options.