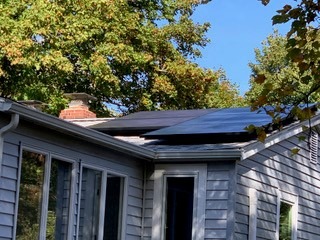 Kenneth Hinga of Bethesda, Maryland recently installed solar on his home and wanted to share the experience with other homeowners. Hear about his experience. 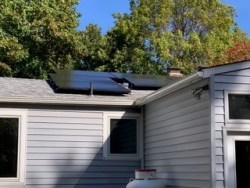 We wanted to install solar, but were told our house in Bethesda had too much shading from trees to make it practical.  We also own a house in Rhode Island that we thought had a good southern exposure.  While up in RI summer of 2020 to do some renovations on the house we contacted a local solar installer for an evaluation.  They came out and did a exposure evaluation and said that the house would qualify (90% exposure) if we removed two pine trees near the house. The pine tree needles were a significant nuisance, having clogged gutters and caused leaks.  We had considered removing them anyway.  We replaced them with some native rhododendrons.  The installation was delayed until we replaced the 35-year-old roofing shingles as part of the ongoing renovations.

The installation itself was 11 panels for a 3.96 kW system size.  We paid for this as part of the renovations, rather than financing.  Our initial investment was $10,600 and expect to get a 26% Federal Tax credit of $2,756, to give a net cost of $7,844.  Projections from the installer are for a $72 average monthly savings on electric bill.  The system is projected to pay for itself in about 9 years and be net profitable thereafter.    Over the 25 year life of the system, the total profit is projected to be $20,745 for a 12% annual rate of return on investment.  The system is expected to offset essentially all the traditional electric usage for this small house through net metering.  However, we also swapped out the dirty old oil heat system for a modern electric heat pump heat and AC system, so the electric usage will likely increase.  The calculated dollar savings should be the same. The installation company handled all the permitting paperwork with the electric utility, a state grant, and provided us the necessary tax forms.  We can check in on the system performance over the internet from down here in Bethesda.

The system was installed in October 2020 so it is too early to see how it lives up to projections, but we are pleased so far.