Residential Superstars: A Passion for Plogging

You know the three R’s like the back of your hand and do your best to reduce, reuse and recycle everything you can – but have you added plogging to your repertoire?

Although you might not know what it means, if you’ve ever incorporated picking up litter into your jog, walk, hike or bike routine, you’ve plogged. A Swedish trend for the last five years or so, plogging interest spread to other countries as the worry over global pollution increased. The name actually means “pick up”.

Today, many folks keep gloves and spare bags close at hand, ready to collect errant waste they see. Here are three Montgomery County residents – a young teenager, a relatively new home-owner, and a nonagenarian – who take their care for the planet via plogging very seriously. 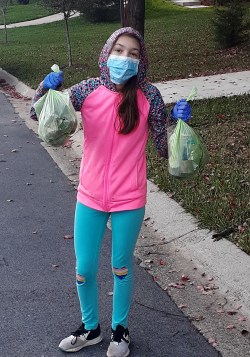 Thirteen-year-old Hannah Kline has had a deep connection to the environment for as long as she can remember.

The seventh-grader says she started picking up things that looked like they didn’t belong on the ground when she was very young, but didn’t really start cleaning up to help the environment until she learned in elementary school the role that storm drains play in getting ground waste into waterways.

“[They] lead to bodies of water that lead to the Chesapeake Bay or oceans. The plastic that goes down the storm drains goes to all those bodies of water and harms the wildlife,” Kline says. “I decided that if I could pick up plastic off the streets and I pick up litter off the ground, then maybe it will save the environment and I could make a difference.”

As most of her friends don’t live within walking distance from her home, Kline plogs with her family. “They don’t really like picking up things off the ground as much, but if I miss a piece of plastic, they’ll point to it. They’re very good at finding what I need to pick up,” she says.

Once home, she always sorts through the things she’s picked up to see what belongs in the garbage and what should be recycled. Occasionally, she finds things she wants to keep, like pencils, pennies and a lion charm that she now wears on a necklace.

In addition to plogging, her family drives electric cars, harnesses wind power for their home’s electricity usage and regularly composts. Mom, Lauren, credits her husband, Sam, for inspiring the family to be so environmentally conscious.

Environmental activist Gretta Thunberg has provided motivation, too. Her work, Kline says, made her decide to plan a school plogging club – but due COVID-induced online learning, she made a few adjustments, including re-purposing an environmental awareness poster she’d made a few years ago. She used it on Scratch – an educational platform that allows for the coding and sharing of projects online. With it, she’s hopeful that others her age will be as excited to learn more about saving the planet as she is.

“All I needed were gloves, a trash bag and a will to save the environment,” she says.

Coming from a farming family, Brienne Remy became familiar with issues involving nature and animals at an early age and has been conscious of the importance of protecting the habitat since. 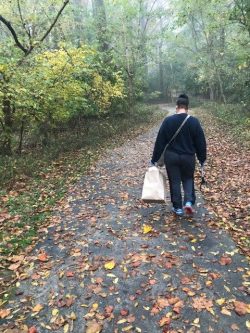 Some inspiration, though, came from outside of her family via the Brownie troop leader she would often see picking up trash from the ground.

Although she says she really didn’t learn what plogging was until she began seeing signs for the Plogging Initiative, Remy actually began picking up trash while waking with her husband about four years ago – just after they bought a home across from Rock Creek Park.

“When I saw the trash there, it inspired me,” she adds. “When I go out now, I take two bags – one for trash and one for recycling. It gives me peace.”

As a learning specialist for an environmental conservation organization, Remy says she would love to see more people picking up trash as well – especially in marginalized communities where plogging can’t always be a priority.

“Environmental conservation is not at the top of the list in the Black community because we have so many other issues to deal with, but doing this shows how we can all contribute to take better care of our planet,” she says.

For those squeamish about picking up litter form the road during a global pandemic, she says it’s important to always wear a mask and rubber gloves in addition to covering exposed limbs. Remy also suggests dumping everything in outside receptacles before entering the house, re-using any plastic bags that may be laying around to collecting trash (to help keep them out landfills), and washing trash pickers with warm soapy water after using them. But really, every little bit helps. 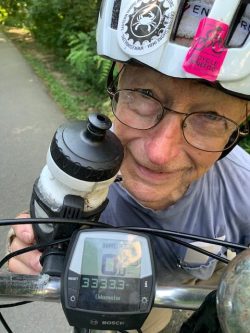 Growing up on Maryland’s eastern shore, Joe Howard, 90, has led a pretty active life – from fishing, crabbing and enjoying the out-of-doors with his father and brothers as a kid to hiking as an adult.

But that almost came to an end in 1989 when he was hit by a car while crossing the street after picking up cans. The two months he spent in the hospital after many, many surgeries helped his broken bones heal, but he couldn’t bend his left ankle quite the same anymore. He instead, he switched to biking.

“You don’t need to bend your ankles much to bike,” he says.

These days, he bikes along Sligo Creek Parkway from Colesville Rd. to University Blvd and back – a 5-mile trek – which it takes him about two hours. Plogging allows him to combine his passion for fitness with keeping the area around the creek litter-free.

“Sometimes I have to get off my bike to pick things off the ground,” Howard says. “I see people who are walking along at a good pace and they pass me.”

But he had no idea that what he’d been doing for all those years actually had a name.

I didn’t know that word until I saw some of those [plogging] posters along Sligo Creek,” he says. 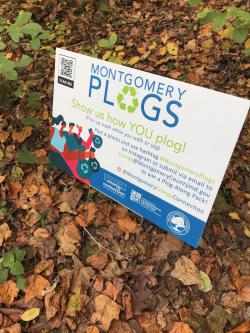 One day while biking his usual route, Howard says he saw a guy toss a bag of trash out of his car window. When he caught him at a red light, Howard tossed the trash right back into the car window.

Before retirement, Howard spent 35 years as an educator, including principal of the Four Corners Elementary School in Sliver Spring. A member of Forestry Board since the 1970s, he was also instrumental in getting the Lathrop E. Smith Environmental Education Center – the site of county sixth-grade residential and day programs – built – all while organizing clean-up groups for the North Hills of Sligo Creek Civic Association and “Adopt-A-Road” days four-to-five times a year via his church.

His clean-up efforts have gotten everyone in his family to recycle.

“After I read ‘50 things You Can Do to Help the Environment,’ I gave it to my daughter. She said it was  a waste of time to read it because I’d taught [her and her siblings] all of that,” he says.

He does “kind of” have a reputation for nagging, he says, even suggesting to his wife, Mary, that folks can only come to his funeral if they picked up some trash on the way.

“It’s a matter of taking pride in the neighborhood. I know folks who said ‘It’s just too much!’ – but my mother use to tell me just because you can’t do everything doesn’t mean you can’t do anything,” he says. “I just sort of carried that on.”