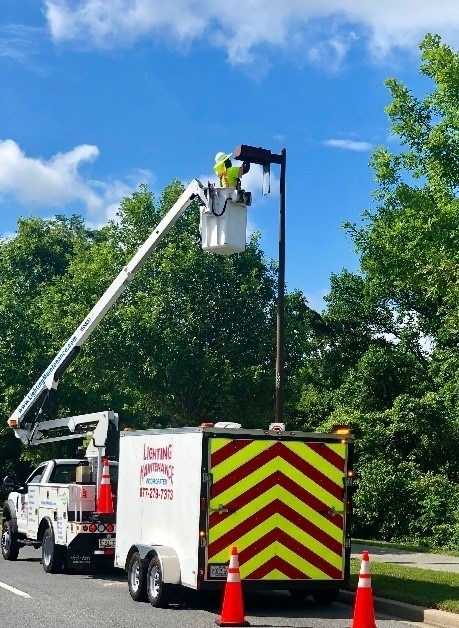 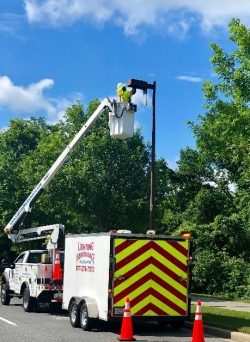 Montgomery County’s Department of Transportation (MCDOT) recently completed its Countywide conversion of streetlights from predominately high pressure sodium (HPS) to light-emitting diode (LED). The MCDOT adopted the LED technology in 2014 and built up a small LED inventory through lighting upgrades, knockdown replacements, and new installs. Beginning in December 2018, the County partnered with Lighting Maintenance Inc. (LMI) to take steps toward this LED conversion of the remaining 25,000 County-owned free-standing streetlights.

LED streetlights offer many benefits, including greater energy efficiency and longer life expectancy. While they are slightly more expensive up-front, LEDs are more cost-effective in the long-run. In total, the project cost was approximately $13.5 million, $4.5 million of which is funded by PEPCO’s Energy-Efficient Streetlights Incentives Program. The County secured a loan to pay for remaining project costs, which is projected to be paid off by 2033 using the energy and maintenance savings resulting from the conversion, estimated at $900,000 annually.

Due to their superior efficiency, LED streetlights require significantly less energy. The new LED lamps used by MCDOT have wattages less than half those of the old HPS lamps. The LED conversion is estimated to yield a 55% decrease in energy usage and a subsequent reduction in associated CO2 emissions of approximately 4,500 metric tons annually. Long life is yet another important LED benefit–while most HPS last about five years, LEDs have a life expectancy of twenty-five years, reducing maintenance requirements.

The conversion project involved streetlights of different sizes across the County, including smaller residential fixtures and larger roadway and central business district fixtures. The residential streetlights, which were nearly all 70-watt HPS previously, have been replaced with 27-watt LEDs. Wattages for larger fixtures in areas that require more illumination decreased by between 40 and 60%. With the completion of this conversion project, less than 5% of all County-owned streetlights currently remain non-LED. These include lights mounted inside tunnels, walkways, and other miscellaneous structures. The MCDOT intends to convert all such lights through future upgrades. 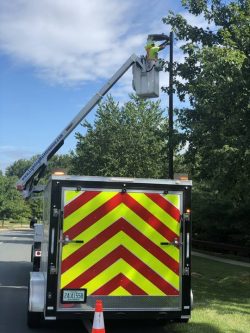 The County’s LED streetlights use photo cells which sense natural sunlight in order to operate from dusk to dawn when artificial lighting is most needed. Although photocells typically have a shorter life expectancy than LED lamps, MCDOT specifications require use of photocells that can easily be replaced, providing for a short repair timeline.

LEDs never fully go out, but decrease in illumination over time. An LED lamp is considered to be at the end of its life when its level of illumination decreases to 70% of its original brightness. Complete outages associated with HPS streetlights cause safety and security concerns until necessary repairs are made. LED streetlights therefore promote greater community safety, as they always offer some degree of illumination, even when they are technically in need of replacement. Additionally, LEDs offer an improved color rendition, enhancing night vision for pedestrians and drivers.

The County’s Department of Transportation is working with PEPCO to update online databases as a last step for this project. This will ensure that all County-owned free-standing streetlights have been accounted for in the conversion process.