“Look! Right there! Under that rock in the middle of the stream! Is that a lobster?” Nope. It’s a crayfish, the smaller freshwater cousin of the lobster. You can’t see a lobster in Maryland except in a saltwater aquarium or on a plate in a restaurant. However, if you look closely, you can find crayfish in pretty much any stream in our state. Maryland has 14 different kinds of crayfish. One of those species is unique to Montgomery and Prince George’s Counties: Acuminate Crayfish. 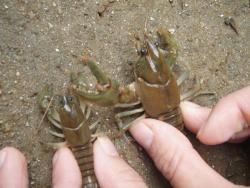 Living with us on Earth are over 650 different kinds, or species, of crayfish or crawfish or crawdads (different names for the same kind of critters). Acuminate Crayfish (Cambarus acuminatus)are only one of those species. The southeastern US is home to more than 350 species of crayfish. It’s literally crawling with crawfish. Maryland has nine native species, five introduced species, and of those five, three are invasive. 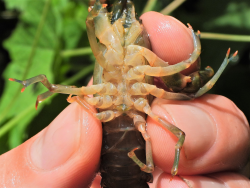 Crayfish are crustaceans. So are lobsters, crabs, shrimp, and barnacles. All those animals are invertebrates with hard shells and ten legs. The pair of legs closest to the head of a crayfish are claws which help them catch things to eat, get food into their mouths, dig burrows, and protect themselves (warning: pick crayfish up just behind the spot where their claws attach to their bodies or risk getting pinched).

Crayfish are predators and will eat whatever they can get their claws on. Crayfish prefer eating other animals – either dead or alive insects and their larvae, small fish, tadpoles, and frog eggs will do. They will also eat plants – again, either dead or alive. They aren’t picky. Big crayfish also will eat smaller crayfish even if they’re the same species. Crayfish are eaten by larger fish, birds like herons, and raccoons which aren’t picky either. 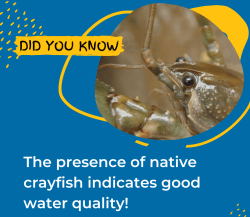 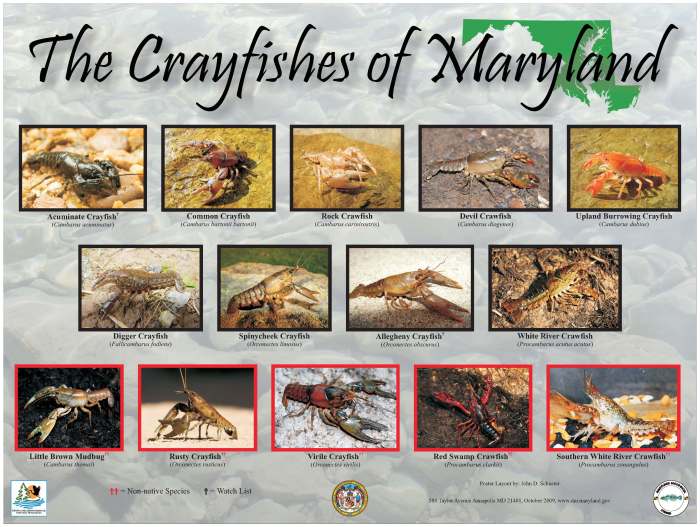 Montgomery and Prince George’s Counties’ special crayfish is the Acuminate Crayfish. It lives in creeks under rocks and logs in shallow burrows.

They were once found in additional Maryland counties including Howard and Anne Arundel Counties in the Patuxent watershed and in Cabin John and Great Seneca Creeks in the Potomac watershed. More recently they have only been seen in the Northwest Branch, Paint Branch and Little Paint Branch Creeks in the Anacostia watershed.

Why are they no longer found in those other watersheds? It could be poor water quality. It could be invasive crayfish. It could be a combination of the two. We don’t know for sure yet.

Acuminate Crayfish are rare. They are the only crayfish in Maryland that are at risk of extirpation, that is, no longer living in Maryland. They are an “imperiled” species “in need of conservation.”³ They got that classification because they live in so few places in Maryland. Their numbers are better in Virginia, North Carolina, and South Carolina and worse in Pennsylvania. Those are the only other states where they are found.

The Biggest Problem for Maryland Crayfish4 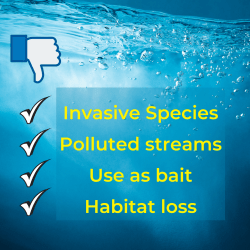 Have you ever invited people over for a party and somebody brings an out-of-town friend along who is the biggest person you’ve ever seen? That new person eats all your food, picks fights with your friends, and, in the end, trashes your home. That’s kind of what it’s like to be a native crayfish in a stream that suddenly is home to an invasive crayfish.

Where did the invasive crayfish come from? In Maryland and other places, live crayfish from other states are sold as bait for fishing. After a day of fishing, anglers (people who fish) empty their bait buckets in whatever stream, river, or lake they’ve been fishing in. The new and exotic crayfish swim off to hunt for something to eat and a place to hide. Not all of these crayfish become invasive. Five new species have been introduced into Maryland over the years, and three are invasive, meaning that they are bigger, more aggressive, and have more offspring than the native species. 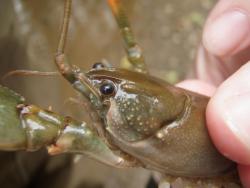 Acuminate Crayfish are survivors! In a world where an invasive crayfish can wipe out a native crayfish or where streams can become polluted or too silty for crayfish to survive, these rare stream critters are still with us. Yay Team Acuminates!

Of course, given their few places where they live, that could change quickly. It’s up to people to help them out because if it’s left up to the bigger and more aggressive Virile Crayfish, they eat them.

People living in the area of land that is now called Maryland before 1800 could see, hear, and hunt elk. Elk gradually disappeared from this area as people changed their habitats. After 1800 the elk were gone or extirpated. Elk no longer lived here – not gone from earth (not extinct) but no longer living in  Maryland. 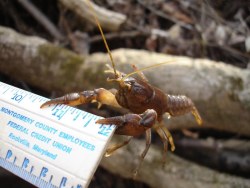 Acuminate Crayfish are imperiled and “in need of conservation” according to Maryland’s Watch List. It would be easy to wipe out a species that is found in so few places. A big spill of a toxic chemical or the introduction of some Virile Crayfish to the stream is all it would take.

Maryland has laws that limit bringing Virile, Rusty, and Red Swamp Crayfish into the state and releasing them into Maryland waters. Other laws prohibit using crayfish as live bait, requiring their heads to be removed before putting them on a hook. Enforcement of these laws is a challenge. Will those laws be enough to ensure the survival of acuminate crayfish?

Don’t miss out on next week’s blog highlighting the next stream critter:  The Giant Stonefly!