Eels have mystified people from Aristotle who thought they developed from earthworms to young Sigmund Freud who couldn’t find what makes a male eel a male and who switched to something he felt more comfortable with – developing psychoanalysis.¹  Scientists have learned much more about eels in the last century. Montgomery County residents who are willing to look under rocks in streams during the day (they are nocturnal animals) can find American eels in Rock Creek, the Anacostia River, Little Falls Creek, and Cabin John Creek and less often in the Potomac watershed above Great Falls.

American eels are not snakes. They are catadromous fish which means they lay their eggs in salt water and live as adults in freshwater. Most fish, including eels, breathe through gills. However, unlike most fish, eels can breathe on land through their skin. This allows them to get over small dams and waterfalls by moving out of the water and over rocks.

There is one – and only one – kind of freshwater eel living in continental North America, the American eel. They live part of their lives in streams and rivers that flow up and down the East (not West) coast of North America. 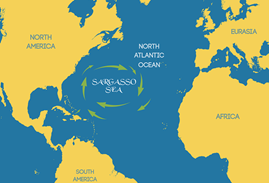 Until the 20th century, no one knew how eels reproduce. Since then we’ve learned about the relationship between eels and the Sargasso Sea. This sea is an area in the Atlantic Ocean surrounded not by land but by ocean currents with the Gulf Stream to the west, the North Atlantic Current to the north, the Canary Current to the East, and the North Atlantic Equatorial Current to the south. It gets its name from the brown sargassum seaweed that floats on the surface. An American eel’s life begins and ends in the Sargasso Sea with the years in between spent in rivers and streams in North America.

When you see eels in our area, they already have quite a history as shown in the diagram. 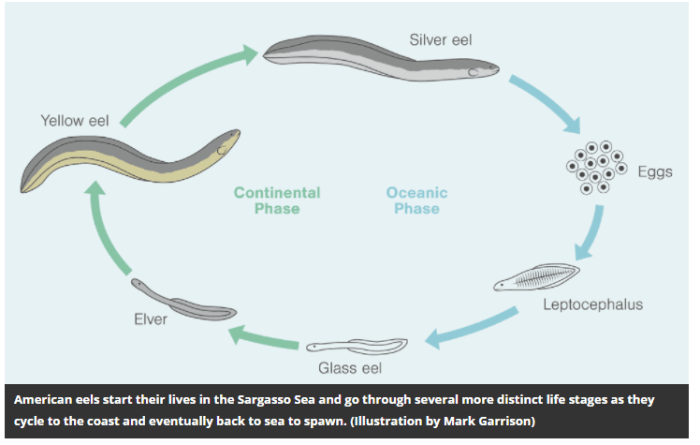 The eel eggs hatched near the surface of the Sargasso Sea, drifted on ocean currents for 9 – 12 months as larvae; became what’s called glass eels as they reached the coastal areas; turned from transparent to brown when they reached the Chesapeake Bay as elvers while still less than 3” long; and swam up coastal rivers, possibly climbed over rocks, small dams, and waterfalls to get farther upstream. Their development continues over several more years in places like Rock Creek and Cabin John Creek. They continue growing and developing, becoming up to 4’ in length. At some point, they get the urge to return to the ocean and they repeat their long journey back to the Sargasso Sea, the place where they hatched many years before. They mate, the females lay 10 to 20 million eggs, and the eels die. Scientists have inferred part of this because it’s very hard to track eels even with sensitive tracking equipment.

It’s hard to choose just one Super Power given the many challenges that the American eels encounter during their life cycles. Here are three: 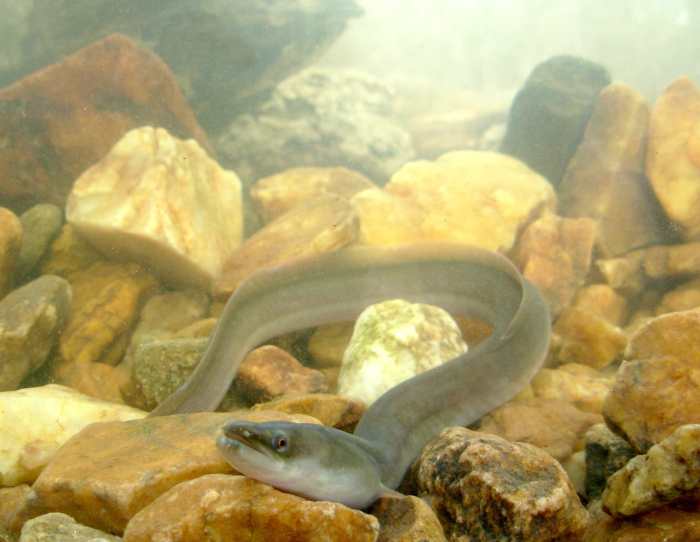 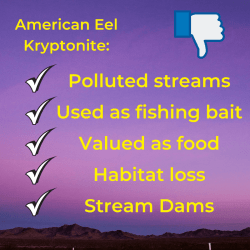 American eels are not on Maryland’s list of rare, threatened, and endangered animals. They are locally abundant. Eels are not on the federal list of endangered species. However, along the Atlantic coast, the American eel is no longer found in some rivers where it used to live. The reasons include dams which can be impossible for eels to navigate over, habitat loss due to urbanization, more sediments in streams and rivers, and water turbines at dams that result in injury and death when eels are sucked through them.

These animals have Super Powers that might not be strong enough to help them survive the continued destruction of their habitat. They are surviving, but with some effort they could be brought back to higher numbers with measures like dam removal, habitat improvement, and improving stream flow rates.

Not only will these recommendations help the eel’s habitat but the other critters they depend on!

Don’t miss out on next week’s blog highlighting the next stream critter:  the Acuminate Crayfish!

² New Yorker book review by Brooke Jarvis (May 18, 2020) of The Book of Eels: Our Enduring Fascination with the Most Mysterious Creature in the Natural World by Patrik Svensson (2020).

4Note to readers: Eels are not venomous but they do have teeth and they will defend themselves if bothered. So a virtual pat is okay but, really, it’s best to leave them alone if you find one. https://www.ctriver.org/the-american-eel-a-peculiar-fish/