Can animals that look like rocks and are capable of trickery and bloodsucking have a positive effect on water quality? What if those same animals had common names like fuzzy pigtoe, purple wartyback, winged spike, fluted elephantear, rough rabbitsfoot, and orangefoot pimpleback? Could you take them seriously? It’s time to meet the stream critter that is the most endangered and hardest working of all the stream critters we’ve looked at so far: the yellow lance mussel. Yes, you should take freshwater mussels seriously. 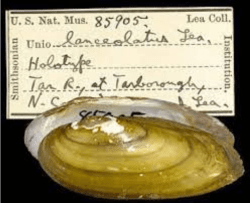 Around 890 species of freshwater mussels live in the world. About a third of them are native to North America. Maryland has 16 native freshwater mussel species with the yellow lance being one of those species. The yellow lance was once found in both the Potomac and Patuxent River watersheds, but is now only found in the Patuxent River watershed in Maryland. It is also found in coastal rivers in North Carolina and Virginia.

A quick note on mussels. The infamous invasive zebra mussel also lives in freshwater. Zebra mussels are not true freshwater mussels. Also, saltwater mussels (the kind we eat) are not closely related to freshwater mussels. All mussels have in common two mirror-image shells (bivalves) hinged together. The shells are longer than they are wide.¹  Clams, oysters, and scallops are also bivalves but with different shaped shells. 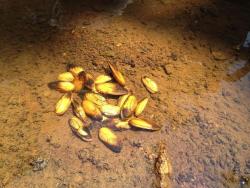 Freshwater mussels are ecosystem engineers. They modify the streams and rivers they live in for their own benefit and the benefit of other plants and animals living in the same habitat. Those modifications make the world better for people too.

Yellow lances like sandy stream beds that they can dig their muscular foot into and anchor themselves in. They need flowing water so they can siphon it in which they filter for oxygen and food (plankton, plant and animal debris, silt, bacteria – whatever the water has to offer them). The second siphon sends the mussel’s waste products back to the stream water. They can grow to about 3½ inches long. 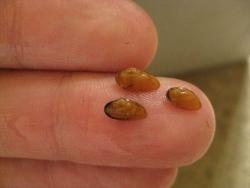 If you find freshwater mussels, you know you’re in an area of good water quality. They don’t live downstream from nearby pollution sources. If their habitat is disturbed (for example highway construction projects), they will die out. Water that has too high a level of silt from too much erosion is also not good for them. A mussel will pull in its siphons and foot, and close their shells for short episodes of dirty water. High temperatures don’t suit them, and they need plenty of dissolved oxygen in the water. 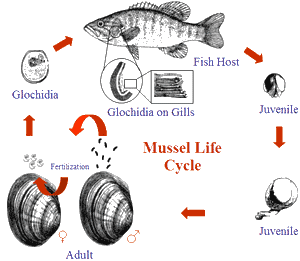 The life cycle of a freshwater mussel like the yellow lance includes trickery and bloodsucking. The most interesting challenge for mussels is that they need certain kinds of fish to successfully reproduce.

The chart shows you the basics. The important step is when the glochidia (larval mussels that kind of look like Pac-Man from the old video game) need to find a specific kind of fish to latch onto for a few weeks. This is where the trickery and bloodsucking come in.

A female mussel needs to attract the right kind of fish. The exact fish differs from mussel species to mussel species.  Some mussels – not the yellow lance – take trickery to amazing levels. The most famous examples are the mussels that use modified parts of their mantles² as fishing lures. Some of these lures look like tasty minnows. Take a look at Natural Fish Lure | Lampsilis Mussel and Bass to see how that works for Lampsilis mussels in Missouri.³

No one knows the exact strategy used by the yellow lance to attract the minnows it favors as the host for her glochidia. It probably releases stringy clumps of glochidia (from 4,000 to 15,000 per mussel) held together by mucus. Those clumps can float below the surface of the water where minnows eat them. In the process, the glochidia that aren’t eaten are close enough to head for the gills! There, they feed on minnow blood for a few weeks or a month before dropping off as juvenile mussels, floating to the bottom, and digging into the sand. The minnows swim on unharmed.

Both the White shiner and Pinewoods shiners are the hosts for yellow lance glochidia.

The advantage of hitching a ride from fish is that the juvenile mussels are delivered to different places to colonize. 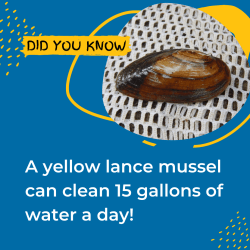 A pat on the siphons for the yellow lance mussels and your freshwater mussel cousins who have survived the changes to their world so far. Hoping we don’t over challenge your super powers in the future.

The National Geographic called the North American and European decline in freshwater mussel populations an apocalypse.5 According to the Maryland Department of Natural Resources, freshwater mussels are the most imperiled animal group in North America. Not every species is in danger of disappearing but an alarming number are. In Maryland, 14 of our mussel species are rare, threatened, or endangered.6

The yellow lance gets a state rating of SU which means their status is uncertain. Not enough is known about them in Maryland. In 2015, Montgomery county biologists discovered a yellow lance mussel in the Hawlings River.7 It was an exciting find since the yellow lance had not been seen in Maryland in more than 50 years. 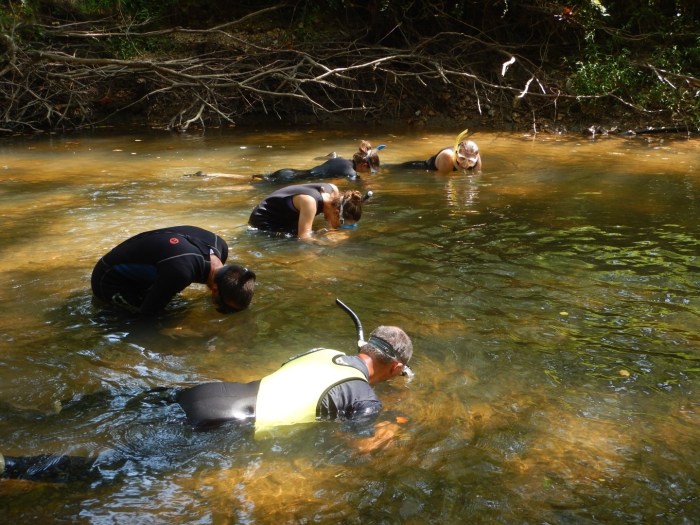 DNR & US FWS snorkeling for yellow lance at a site. 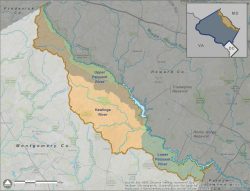 Map of the Patuxent watershed and its subwatersheds in Montgomery County.

It led to the Patuxent River watershed being included with North Carolina and Virginia in the US Fish and Wildlife Service naming of the yellow lance as a federally threatened species in April 2018. This year, they designated critical habitats and included 3 miles of the Patuxent River and 7 miles of the Hawlings River in Montgomery and Howard Counties.8 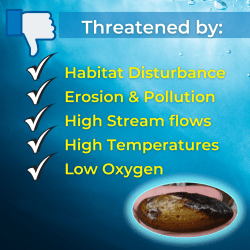 We know what threatens freshwater mussel populations. We know freshwater mussels are important to stream quality. In 2014 Maryland relocated a bed of mussels that was threatened by a major road work near Deer Creek in Rocks State Park.9 The mussels were tagged and moved upstream. Four years later, the Maryland Department of Natural Resources reported that the mussel colony (not a yellow lance colony) was doing well.

People are trying to bring back mussel populations including the yellow lance. Fingers crossed! 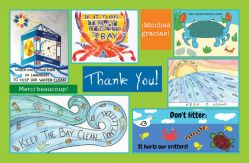 We would like to thank Gail Melson for working with our staff during the summer to help us with this blog series. Gail’s help was invaluable!

² The mantle is living tissue that lines the inside of their shells. It envelops the soft parts of their bodies.

³There are two species of Lampsilis mussels in Maryland that do this: the yellow lampmussel and the plain pocketbook mussel. Both are found along stretches of the Potomac River in Montgomery County.